London studio Fredrikson Stallard has completed the Reformation collection of furniture and art made using cardboard found on the streets of the city.

The collection includes a series of low-level coffee tables, a cabinet and a console table made from bronze cast to resemble cardboard, as well as a dining table made from aluminium with a white lacquer finish, and wall-hung works.

All eleven pieces are cast from collages of cardboard or use actual cardboard in their composition.

"We've worked with cardboard a number of times over the years, and we often work with low value materials," explained Ian Stallard co-founder of Fredrikson Stallard.

"It's quite important in a way as you can be very free with a low value material. We always say that if you have a beautiful canvas and are about to start a painting it can be very daunting and you're more likely to make mistakes," he continued.

"Working with cardboard it great as there isn't that inherent preciousness of working with the material itself."

The designers describe the material as "extraordinarily versatile, with a complex language of its own".

To produce the pieces, the studio collected huge quantities of abandoned cardboard packaging discarded on the streets of London. They then broke down the pieces – tearing, folding and flattening it into collage compositions.

The name Reformation refers to the process of disassembling and reconfiguring the cardboard, as well as indicating that it will take on a second life.

"By casting it in bronze, Fredrikson Stallard perform a kind of alchemy, but they also acknowledge its inherent value as a crucial 21st-century material, the carrier of our precious cargo," added David Gill Gallery, the designers' representative in the UK.

The cardboard collages are put into an industrial steel-press to be flattened before being cast in metal. The collages tend to slip whilst being pressed, meaning that unexpected forms emerge.

"Incredible shapes appear without your full intention, but you learn how to encourage certain forms and discourage others," said Stallard. "It's a kind of choreography."

By finishing the pieces in black, patinated bronze, the designers allow for the rough edges of the cast corrugated cardboard to be rubbed away through natural wear and human touch to reveal the bronze beneath.

The designers found that different types of cardboard responded in different ways, for example FedEx boxes sent from Asia have a rough texture and tear well, whilst crisp packet storage boxes are thinner and easy to manipulate.

Some pieces bear the marks of damage in transit or are covered in labels and post marks. 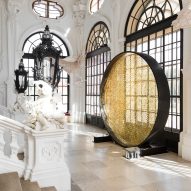 "You have to be brutal when you rip the card, to really expose the corrugation," said Patrik Fredrikson, co-founder of Fredrikson Stallard. "But we never force a material to do something it doesn't want. We interact with our materials in an intuitive, symbiotic way – that's how you access their energy and materiality."

The designers hope that the pieces will spark a conversation about where the line between furniture and art sits.

"Furniture or art? Perception is all and the answer, clearly, is both," they said.

The pieces remain on show today at David Gill Gallery on King Street in Mayfair. Reformations is the sixth show that the designer-artists have shown at the gallery.

They have previously shown tables that appeared to be wrapped with crumpled sheets of metal, and a sofa that resembled a hunk of roughly hewn rock, and an armchair and footstool called King Bonk.