Held in the artists' studio in London in 2017, Hybrideae featured a range of large-scale bronze planters developed through a process that combined hand-crafting with digital technology.

Patrik Fredrikson and Ian Stallard initially sculpted rough forms by hand-shaping red terracotta. They then scanned the objects, scaled them up and used CNC machines to cut the enlargened forms from blocks of foam.

The foam was then used to create a mould from which the final pieces were cast in bronze.

In the video, the Fredrikson and Stallard explain how they invited Chan, a longstanding friend, to perform at the vernissage of the Hybrideae show. "When we saw these finished bronzes, it felt like they needed to sit on a classical platform," said Fredrikson.

"The first thing that sprung to mind was Bach's Cello Suites," said Stallard, although the designers felt that the famous pieces, written between 1717 and 1723 for an unaccompanied cello, needed contemporary input to make them more relevant to their Hybrideae pieces. 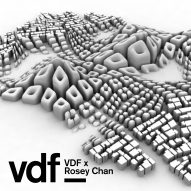 "That's when we called up Rosey," said Fredrikson.

"The starting point was Bach's Cello Suites as that was the element that Fredrikson Stallard were very keen on," said Chan.

"As their project involved the relationship between digital and analogue, I decided to explore combing pure live analogue sound of the cello, with a pre-recorded grid of digital sounds, and then in the live environment, giving myself enough digital material to improvise around the live cello, in a 25-minute performance," said Chan.

"The work of creating this grid of digital sounds was very long and involved and consisted of me using elements like the human voice, but treated digitally," she added, explaining that she incorporated "abstract sounds, music concrète, an arpeggiator, and various synthesisers, creating enough choice so that in the live performance I could do something completely original and spontaneous."

Chan studied piano and composition at the Royal College of Music in London and now performs, composes and collaborates with artists and designers.