Occupying the first floor of a David Chipperfield-designed building in Chelsea, the De Padova showroom has been created by Piero Lissoni to boast a number of living-room style set-ups.

This is the first brick-and-mortar De Padova space to open in the UK. The brand made plans to expand its presence globally after being acquired by Boffi in 2015, and has since established branches in Milan, Paris, and New York.

"We chose Chelsea because it's Chelsea," Lissoni told Dezeen, who is also art director of De Padova. "For me its such a vibrant quarter, full of interesting places – shops, restaurants, design stores, beautiful buildings. The community there is also like a small village."

The showroom has been finished simply with white-painted walls and pale grey linoleum floors. Light floods in from expansive panels of glazing, which overlook the boutique-lined streets below.

"To be [called] minimalistic is a fantastic compliment – I'm Milanese, I like to be simple and for there to be a natural understatement in style, in life. And a little bit of elegance – that is a crucial word," explained Lissoni. 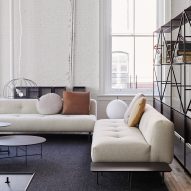 "Some of us design very cleanly, and others like things to be a bit noisier but in the end its only a discussion about language. I prefer my semantic to be more sophisticated, more calm, more silent."

At the time of its opening, the showroom featured a series of sitting room-like areas dressed with stone-coloured sofas designed by Lissoni himself, spherical lamps by Elisa Ossino, and marble-effect storage cabinets by Boffi's sister company MA/U Studio.

Partition walls had been traded for a series of 606 Universal Shelving Systems – originally designed by Dieter Rams – which were dressed with various lifestyle props like books and vintage luggage trunks.

The rear of the store also had a bedroom and bathroom display area.

De Padova was founded in 1956 by Fernando and Maddalena De Padova, who began by selling Scandinavian furniture out of a small store in Milan.

As well as designing interiors, Piero Lissoni has also created a number of products for renowned Italian brands. Earlier this year he released a series of marble bistro tables for Salvatori, as well as a modular sofa system for B&B Italia which he described as a "platform for life".