The locally based studio reconfigured the existing ground floor of the Edwardian terraced house, improving the connection between the interior and a long, narrow rear garden.

Nimtim Architects' clients wanted spaces that would be more comfortable to inhabit as a family, as well as being flexible enough for everyone to have some space to themselves.

The Hive House project focused on improving the existing layout and replacing an unattractive and inefficient conservatory with a more cohesive addition containing a new kitchen, dining and living area.

"We looked at ways of structurally opening up the spaces that existed in the main house and connecting them with the extension in a discreet way so they don't feel like separate spaces," architect Tim O'Callaghan told Dezeen.

The stepped plan of the new addition responds to existing extensions on either side and is designed to minimise its impact on the neighbours.

A modest budget ultimately determined the choice of materials and construction techniques used throughout the project, which contribute to a design that Nimtim Architects described as "unpretentious but materially and spatially rich".

An exposed plywood structure helped to reduce steelwork costs and functions both as structure and internal storage. This framework is clad in a skin of red brick that matches masonry found on the front of the terrace and adds robustness where required. 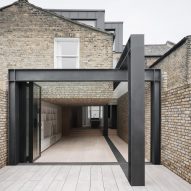 The brick is laid in a stack bond with a light, recessed mortar that accentuates the geometric pattern. The cladding continues across an internal party wall, where it complements the linear structure of the plywood frame.

"We wanted to be as honest as possible about what every element and material is doing," explained O'Callaghan, who oversaw the project led by his colleague, Jessica Spresser.

"On the party wall we needed to use brick for fire safety and other reasons, so we left it exposed. We did the same with the timber structure, leaving it to become a feature in its own right."

Other materials are also used in their raw state to continue the honest and practical theme of Hive House.

The doors and windows feature a simple dark-grey aluminium frame, and are topped with fascias in patinated lead that offered a more affordable solution than creating a brick soffit.

Internally, the floors and worktops are made from cast concrete, while the kitchen units and storage are constructed from plywood to match the exposed timber structure.

Nimtim Architects worked closely with the contractor to develop non-standard construction solutions that contribute to the overall sense of cohesion and enabled the project to be completed on budget.

The architects have previously completed several other extensions to London properties, including one that opens onto a steeply terraced garden, and a pergola-like addition that connects a house in Peckham with its garden.