Timber portals frame windows and skylights in this garden-facing extension, which Nimtim Architects has added to a terraced house in Peckham, southeast London.

The London-based practice designed the extension and renovation to an "unremarkable" infill house built between brickwork residences during the 1950s.

The client, a young professional, wanted the extension to serve as an open-plan kitchen and dining area with a connection to the rear garden. They also asked that the existing material palette be updated, feeling it was of poor quality in comparison to the residence's Victorian-era neighbours.

"The brief was to create a bright and open living space with materials of quality and character," explained Nimtim.

The architects removed the rear wall of the property and added the series of lightweight timber frames, which rest on a new exposed brick wall on one side.

This Douglas fir framework is supported by additional frames that run in the opposite direction and define large skylights.

Glazing is also used to form the new rear wall, with sliding glass doors providing access directly to the garden and helping to bring plenty of natural light into the space.

"The timber structure defines a series of openings along the roof and onto the rear garden," explained the architects. "This grid extends through the house and out into the garden; blurring the threshold between inside and out."

Inside, the architects chose simple materials to complement the warm hue of the timber frames, using poured concrete for the floor and leaving a brick wall exposed along one side of the space

White plywood kitchen cabinets with wooden worktops run along the opposite wall, and a long central island is topped with white marble.

A set of stepped storage cabinets are built against the end walls and filled with pot plants. Next door, in the existing living room, the walls have been painted pink.

Nimtim also worked with its partner company Nimtim Landscapes to design the garden, adding a large paved patio for outdoor dining next to a bed filled with plants of various heights and textures. Yellow Yarrow, Turkish Sage flowers and prickly Berberis were among their choices.

There is also a young pear tree, which provides a focal point at the back of the garden, and a trellis with climbing honeysuckle that will eventually flourish to disguise a small wooden shed.

Nimtim, which was founded by Nimi Attanayake with Tim O'Callaghan, has completed a number of London house extensions, including one with parquet flooring and blue-stained woodwork and another featuring a yellow and white colour scheme, which shortlisted in 2017's Don't Move, Improve! competition. 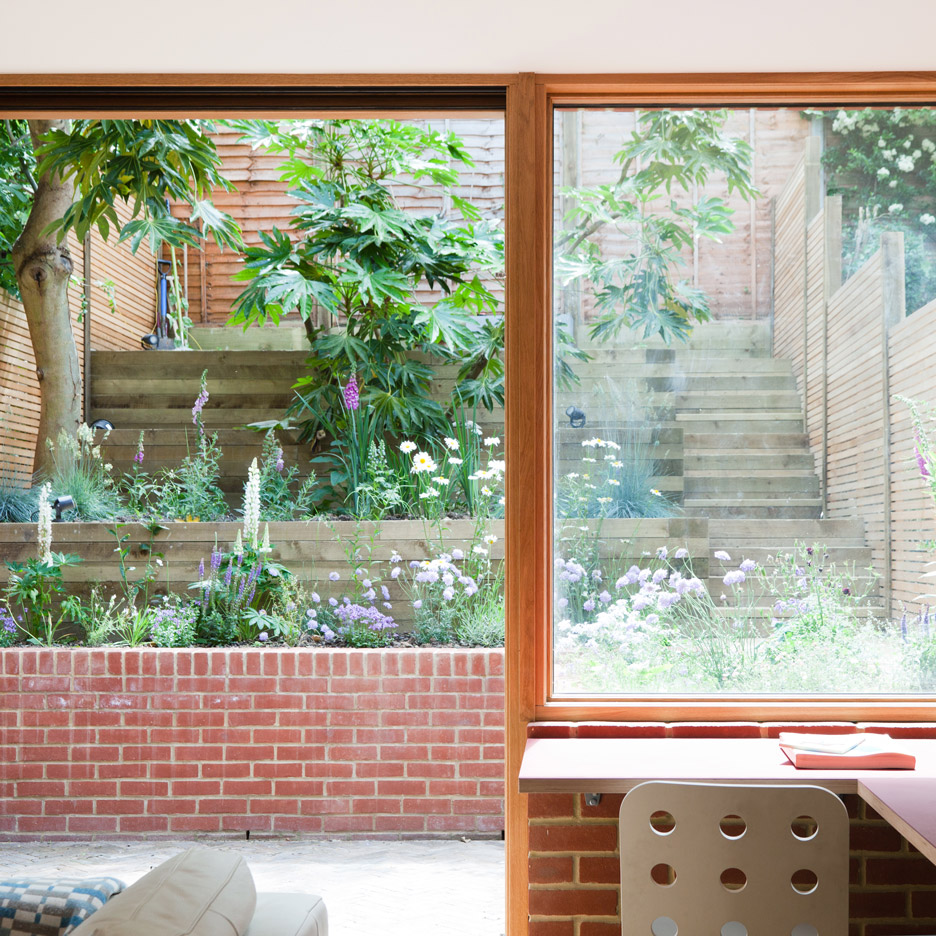