Zaha Hadid Architects has completed the Al Wakrah Stadium, a venue for the 2022 FIFA World Cup in Qatar, and it hosts its inaugural match today.

Located in the city of Al Wakrah, around 10 miles south of Doha, the 40,000-seat stadium opens with the Amir Cup final between Al Sadd and Al Duhail tonight.

Zaha Hadid Architects' stadium is one of several new venues being built for the football tournament in 2022, and is first to complete.

In total, eight venues will be used during the World Cup, including the Khalifa International Stadium that was redeveloped in 2017 and the 80,000-seater Lusail Stadium designed by Foster + Partners.

Another of the venues, the Ras Abu Aboud Stadium, will be built using shipping containers.

The distinctive form of Zaha Hadid Architects' Al Wakrah Stadium was taken from the shape of the typical fishing boats – called dhows – that can be seen in the city's harbour. 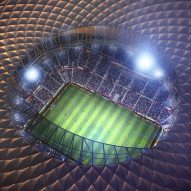 However, when visualisations of the stadium were first revealed many people compared its shape to female genitalia.

The stadium has a fully retractable roof so that the players and spectators can be cooled, allowing for the building to be used all-year round.

"I am certain that in 2022 Al Wakrah Stadium will be one of the most iconic venues at the World Cup, and it gives us all a sense of great pride to be opening the second Qatar 2022 stadium with three and a half years to go," said Jassim Al Jassim, head of venues operations at the Supreme Committee for Delivery & Legacy.

"I look forward to working together with all our stakeholders, friends and colleagues over the coming years to enjoy many more momentous occasions."

Following the World Cup, the capacity of the stadium will be reduced to 20,000 in a similar manner to the studio's London Aquatic Centre, which had its capacity reduced form 17,500 to 2,800 following the 2012 Olympic Games.

Zaha Hadid Architects was founded by Pritzker-winning architect Zaha Hadid in 1980. The studio has been led by Patrik Schumacher since Hadid passed away in 2016.

The studio is currently designing a concert hall for Ural Philharmonic Orchestra in Russia, a pair of skyscrapers in London, and an office on world's most expensive site in Hong Kong.

Photography is courtesy of the Supreme Committee for Delivery & Legacy unless stated.