Qatar has revealed plans for the 80,000-seater Lusail Stadium, designed by Foster + Partners to host the final of the FIFA World Cup 2022.

The stadium, designed by Foster + Partners, will be located nine miles north of central Doha, the capital of Qatar. It will host both the opening and closing games of the football tournament in 2022.

According to Qatar's Supreme Committee for Delivery & Legacy, the design of the golden building references Arab architecture, as well as the "intricately detailed bowls" that have been created in the Middle East for centuries.

"The new stadium is a nod to our past and a symbol of an exciting future," said Hassan Al Thawadi, secretary general of the Supreme Committee for Delivery & Legacy.

The venue will be built in Lusail – a town north of Doha, once the home of Qatar's founder, Sheikh Jassim bin Mohammed Al Thani – as the centrepiece of a new modern city that is currently under construction. 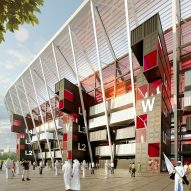 "We hope that one day, future generations look at Lusail Stadium as a source of inspiration, perseverance and innovation that enabled the transformation of Lusail into the modern city it is."

Following the tournament, the majority of seats will be removed and the stadium will be transferred into a community centre. A school, health clinic, cafe, and housing will be built under the stadium's roof, along with a community football pitch.

"This is an exciting step forward in stadium design – it will be the first to break the mould of the free-standing suburban concept, and instead anticipates the grid of this future city, of which it will be an integral part," said Norman Foster at the time.

"The project also pioneers the idea of an ongoing life for the stadium beyond the big event. The environmental strategies, particularly those that address the players as well as the spectators, will also be of international interest to the sporting public as well as those concerned with the architecture."

The stadium is one of 10 being built for the Qatar World Cup. Others include the Al Thumama Stadium, which is being designed to look like a knitted white cap traditionally worn by Arab men, and the Ras Abu Aboud Stadium, which will be made from shipping containers.

Zaha Hadid Architects has also designed a venue for the event, the Al Wakrah Stadium, which is already under construction.

Images are courtesy of Qatar Supreme Committee for Delivery & Legacy.