The show apartment is located within 196 Orchard, a recently completed 11-storey condominium building in the Lower East Side neighbourhood. The building contains 89 units, from studios to four-bedroom apartments. Prices range from $985,000 to $5.9 million (£773,875 to £4.6 million), according to Real Estate Weekly.

Alex P White, an interior designer who runs an eponymous New York studio, was tasked with creating a model unit that would appeal to potential buyers. For a one-bedroom apartment totalling 686 square feet (64 square metres), White used finishes and decor in neutral tones to create a calm and elegant atmosphere.

"For me, a memorable experience of a great interior is always about setting the mood and getting the mix just right," the designer said in a project statement.

Upon entering, one steps into an open-plan kitchen and living room. A glass door leads to a generous terrace featuring gilded bronze bricks, charred-wood planter boxes and concrete dining furniture.

Inside the apartment, concrete ceilings were left unfinished, lending a raw aesthetic to the space. Adding to the effect are plaster walls with a light grey finish that mimics concrete.

"I decided to bring the ceiling finish down the walls, wrapping all the rooms in the same textural drama," the designer said. "This makes the spaces feel cosy and epic at the same time, while the moody palette really emphasises the views to the terrace." 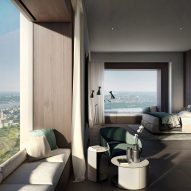 The kitchen – designed to merge style and functionality – features quartz countertops, walnut and lacquered cabinetry, and Miele appliances. Behind the stove, the designer integrated a dark backsplash made of Nero Marquina marble.

A bar is lined with wooden stools from Coil + Drift. Other pieces of carefully chosen decor include a stainless steel tea kettle by Aldo Rossi and a ceramic vase by Ettore Sottsass.

The kitchen looks upon a narrow living room with a mix of shapes and textures. One wall is lined with a built-in sofa wrapped in Belgian linen and a travertine lounge table – both designed by White. Above the sofa is a series of ivory wall hangings by Los Angeles artist Mary Little.

"I decided on an 'unfurnished' approach for the project – opting instead for custom built-ins that extend and respond to the architecture, while providing most of the function for the space without the visual clutter," the designer said.

The opposing wall features a large walnut shelving unit designed by White. A Wiggle cardboard chair by Frank Gehry adds a sculptural touch to the space.

"Well-selected art and design objects should do more than simply decorate – they should add narrative," said White. "I used a few iconic vintage pieces mixed with contemporary objects that I thought had a significant dialogue with the recent past."

In the bedroom, the designer created a platform bed with a headboard that rises to the ceiling. A slender black cabinet by Brooklyn designer Stephen Bukowski contrasts with the light tones that dominate the space.

Throughout the apartment, thin LED strips are integrated into the ceilings. Other lighting fixtures include bedside lamps by Richard Sapper and a Bloom table lamp by Tim Rundle for Resident.

Model units play a key role in selling condominiums in New York City. Other show apartments in the Big Apple include one by British architect David Adjaye for his first Manhattan skyscraper, two at Zaha Hadid Architects’ luxury condo building in Chelsea, and a unit within David Chipperfield’s The Bryant tower that was furnished by online retailer Radnor.

Photography is by Colin Miller, unless stated otherwise.