Danish architect Bjarke Ingels says he is proud that BIG buildings don't have an identifiable style, in the latest episode of new podcast Time Sensitive.

"I would definitely take it as a compliment, because I would normally say that having a style is almost the sum of all of your inhibitions," he stated. "It's like a straitjacket that keeps you confined to who you were and inhibits you from who you could become."

The BIG founder said he places more focus on the approach to architecture than on the end result.

"I would like to stay rigorous in how we approach things, but I would rather be rigorous in the questions I ask more than the answers I come up with," he explained. "Hopefully, the answers should always be informed by new information."

In the interview, which is available to download from today, Ingels said that he got his first taste of this approach while working for his favourite architect, Rem Koolhaas, at Rotterdam-based firm OMA.

He explained that he joined OMA with the belief that every building came out of Koolhaas' mind fully formed. But he quickly learned that was not the case.

"I was so in love with the whole idea of OMA. I read everything Rem Koolhaas ever said or wrote. And I had a pretty fixed idea of how it was," Ingels said.

"Then I realised that OMA was a very heterogeneous organism. It was not at all this uniform movement. It was a much more complex organism that was somehow steered by incidental input from the chief curator, Rem Koolhaas," he continued.

"There was all of this production going on, sometimes almost aimless production of ideas and forms. Sometimes I was frustrated at how almost mindless [it was]."

"You're dying to catch up"

The architect said that, after leaving OMA in 2000, he had no goals besides "maybe trying to do it on my own". He founded BIG in 2005, after a brief collaboration with Belgian architect Julien De Smedt as PLOT Architects. But Ingels claims that 2019 will finally be the year when BIG shows off the full scope of what it can do. 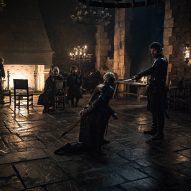 "The reality the world can see is coming five or 10 years later. For example, this year we are opening 11 buildings: three museums, three skyscrapers, the power plant with the ski plant on the roof, a habitat for pandas in the Copenhagen Zoo," he continued.

"That means that this year, 2019, the world can see finally what we somehow knew nine years ago. You're dying to catch up."

Among the projects that Ingels said he is most excited about are the Amager Bakke Waste-to-Energy Plant in Copenhagen, which has a public park on its roof, and the BIG U, a huge system of flood defences for Manhattan.

Both projects, according to Ingels, show how important it is to design for decades in the future – a time when the state of the environment may be catastrophic and humans may even have colonised outer space.

He cites historic cathedrals, the Duomo in Milan and the Sagrada Familia in Barcelona, as examples of buildings designed with the future in mind.

"We're starting to understand that, because something takes a long time, that's exactly why you have to start now," he said.

"Just because it is going to take 100 years, maybe, to put a small city on Mars means that we actually have to start now, because otherwise we won't get there in 100 years," he added.

"All of these huge projects that take long-term commitment are actually the most important projects we can engage with, and the fact that we might not see them realised in my lifetime is even more of a reason for getting them started now."

Reflecting on his career to date, Ingels said it has been "pretty goddamn amazing".

"I would actually rather do this than live in paradise."

The podcast interview was recorded on 6 February 2019. It is the fourth episode released so far by Time Sensitive, which forms part of new media company The Slowdown, which Zuckerman founded in partnership with former Surface editor-in-chief Spencer Bailey.

The series aims to offer clarity on some of today's most pressing issues. The debut episode featured actor Peter Sarsgaard, followed by chef and Ghetto Gastro co-founder Jon Gray and stylist Kate Young.

The podcasts are available to stream from the Time Sensitive website or via Apple Podcasts, Google Podcasts, Spotify, Stitcher, RSS, iHeartRadio, and SoundCloud.