Danish architect Bjarke Ingels, founder of BIG, has joined the cast of Game of Thrones for one of the final episodes of the hit television show.

Ingels posted a picture on Instagram of himself in full costume, clinking goblets with the Danish actor Nikolaj Coster-Waldau, who stars as Jaime Lannister in HBO's fantasy epic.

Ingels is a personal friend of Coster-Waldau, and apparently a Game of Thrones super fan.

Speaking to Vogue for a feature on Ingels, Coster-Waldau boasted that "Bjarke knows more about Game of Thrones than anyone I've ever met".

The actor and architect's friendship has been well-documented in the press. Ingels told Wired that the actor had given him advice on handing fame and posing for photos with fans. The pair were also spotted by Vice at a Game of Thrones-themed 4/20 party in 2016. 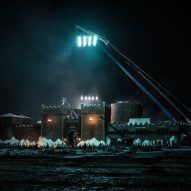 It appears his friend may have invited him along as an extra while filming the final scenes of the series. The architect confirmed in the comments of his Instagram post that he appeared in episode five of season eight.

The twists, turns and inevitable deaths of this penultimate episode proved pretty unpopular with many longterm fans of the series, but eagle-eyed architecture fans who can bear to re-watch it might be able to spot the BIG founder in the background.

Ingels, who founded BIG in 2005, is designing Two World Trade Centre in and a park-covered highway on Brooklyn's waterfront in New York. The studio is also currently working with Thomas Heatherwick to design a headquarters for Google in California.

Dezeen spoke to Game of Thrones production designer Deborah Riley about the challenges of filming the final season, which included scraping fake snow off of muddy outdoor sets and hand-painting piles of corpse props to film the longest battle scene in television history.