The Dalí Museum in St Petersburg, Florida has used a controversial artificial intelligence technique to "bring the master of surrealism back to life".

The art museum worked with San Francisco advertising agency Goodby Silverstein & Partners on the Dalí Lives video installation, which looks like it stars the real Salvador Dalí but is actually what's known as a "deepfake".

Using an advanced form of face-swap technology, deepfake videos show a personality saying or doing things they have not, in reality, said or done.

Deepfakes rose to public attention in 2018 after Buzzfeed made one of Barack Obama amid concern the technique could become a driver of "fake news" or misinformation campaigns.

The Dalí Museum borrows the technique for a more light-hearted purpose. Its moustachioed deepfake Dalí greets visitors from multiple screens and engages in a short interaction with them.

It speaks in a mix of genuine Dalí quotes and invented present-day commentary, and ends by turning around, taking out a smartphone and snapping a group selfie with his audience.

The Dalí Museum created the installation to bring the artist, who died 30 years ago, "back to life" and to help visitors connect to his art in a new way.

"What Dalí Lives adds is a sense of emotion," said museum director Hank Hine. "If visitors can empathise with this man as a human being, then they can relate to his works much more directly and much more passionately."

As with other deepfakes, Dalí Lives was made using a machine-learning algorithm that studied its subject across hours of video and then superimposed his facial features over those of an actor, contorting them to fit the subtle movements of the face.

The result is near indistinguishable from an authentic video. The actor had a similar physique to Dali and also voices the video.

To capture his personality, they extracted quotes and wrote new dialogue based on old interviews, books and personal letters.

Unusually for a deepfake, Dalí Lives is interactive. There are 125 different videos within the installation, which play in 190,512 possible combinations depending on user response. 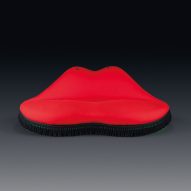 While the similar use of holographic technology to resurrect dead musicians for concert tours has stirred ethical debate, that is unlikely to be an issue for Dalí Lives. The artist was famously a populist who loved public attention.

The museum points to this quote of his: "If someday I may die, though it is unlikely, I hope the people in the cafes will say, Dalí has died, though not entirely."

While he is best known for paintings such as The Persistence of Memory, Dalí also designed furniture, including the Mae West Lips sofa.

Dalí Lives is on permanent display at the museum. It opened on May 11, on what would have been the artist's 115th birthday.