In this exclusive video produced by Dezeen, curator Kathryn Johnson explains the story behind Salvador Dalí's lobster telephone, currently on show at the Design Museum's exhibition Objects of Desire: Surrealism and Design 1924 – Today.

"The lobster telephone is like a guest of honour in this exhibition," Johnson said. "It seems that although it was made in the '30s, it still attracts such love today, and we can't get enough of it."

In this exclusive video produced by Dezeen, curator Kathryn Johnson explains the story behind Salvador Dalí's lobster telephone, currently on show at the @DesignMuseum's exhibition Objects of Desire: Surrealism and Design 1924 – Today. pic.twitter.com/Z0J7p8Imkn

One of the main themes of the exhibition is desire, which Surrealist founder André Brenton once described as the sole motivating force in the world, and the only master that humans should recognise.

Describing how the lobster telephone came to be, Johnson explained that for Dalí, "lobsters and telephones were both very sexy objects".

"[The phone] started with a little sketch of what he called an aphrodisiac telephone – and you can imagine if you're talking on the lobster telephone, it would look like you were sort of kissing the lobster," said Johnson.

"A lot of surrealist designs invite you to be performers, to be actors, and to complete the work by using it. And this is very much in that vein."

Johnson chose to display the Lobster Telephone alongside another notable work of Surrealism, the Mae West Lips Sofa.

"We've shown it [together] because these works are often seen in isolation as sculptures - but the point we want to make is that these were actually interior design commissions, they were functioning, they were used," added Johnson. 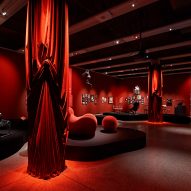 The exhibition features many other iconic surrealist works by figures such as Man Ray, René Magritte and Elsa Schiaparelli, as well as contemporary works from designers and artists such as the Campana brothers, Sarah Lucas and Anna Lindgren and Sofia Lagerkvist for Moooi.

This video was produced by Dezeen for Design Museum as part of a partnership. Find out more about Dezeen's partnership content here.

Tickets are available at designmuseum.org/surrealism.