The Times Square Edition in New York is billed as Times Square's first design hotel and an "elevated" entertainment destination for locals, including multiple restaurants, bars, and a nightclub.

Yabu Pushelberg founders George Yabu and Glenn Pushelberg designed the project for legendary hotelier Ian Schrager. The trio first became friends in the heydey of Schrager's infamous Studio 54 nightclub, which was located several blocks away from The Times Square Edition.

The new boutique hotel marks their fifth collaboration and presented an opportunity to evolve the district New Yorkers love to hate. The team describe it as the "ultimate counterpoint to its surroundings".

"We thought, 'Let's go back to where it started. Let's make it a bit European, chic, with simple materials – something unexpected that adds value to Times Square'," Pushelberg told Dezeen.

The 452-room hotel rises 42 storeys from behind a 17,000-square-metre LED billboard that wraps around its bottom half.

Unlike other hotels nearby, the Edition's ground floor entrance is relatively nondescript with a glass curtain and cream limestone doorway. Inside, a long cream bench guides guests to the lobby elevators, with a metallic custom art installation hanging like a bullseye at end of the hall.

"We didn't want it to feel like a big hotel," said Yabu. "Our idea was to break it down into a series of spaces that are intimate and more residential."

Throughout the Edition, Yabu Pushelberg emphasise botanicals and a neutral colour palette. It's a combination that, according to Pushelberg, can appeal to both the uptown and downtown crowds, leveraging influences from Central Park's iconic Tavern on the Green and hip supper clubs below 14th street. 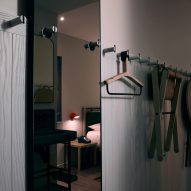 Sitting on the eighth floor, the lobby features lush green walls, cream curtains and wood paneling, and black herringbone floors. The team designed the adjacent Lobby Bar with contrasting ivory tones and a custom onyx bar, with natural light coming in from floor-to-ceiling windows and the Blade Runner Terrace.

"Terraces were unheard of in Times Square," said Pushelberg. "We made them like outdoor rooms with botanical boundaries that hide the cacophony beyond."

On the seventh floor is the Paradise Club, the nightclub and performance venue inspired by Studio 54.

The room is anchored by a horseshoe stage and infinitive surrealist murals hand painted by Studio En Viu. Opposite the stage is a bar backlit by a metal grid screen emanating amber light.

Yabu Pushelberg initially planned for guest rooms to be black and white, though they later opted for a neutral palette that would be "analogous to the vivid colours of the neighbourhood".

The compact rooms comprise white oak floors, linen arm chairs and lamp shades, and parchment-coloured drapes. "Each element alone might seem very bland, but they come together perfectly – a perfect contrast to what is outside", said the firm.

The hotel is the latest outpost of the Edition chain that Schrager launched in partnership with Marriott International, with others located in London, Miami and Hawaii.

Schrager often enlists well-known architects and designers for his projects, with examples including John Pawson and Herzog & de Meuron, which designed his Public hotel in New York.

Yabu Pushelberg was founded in 1980, and has offices in Toronto and New York. It has become the go-to for hotel brands across the world, completing other projects for the Marriott, Four Seasons and Park Hyatt.

The firm also recently worked on the interiors of the The Moxy Times Square hotel, a subsidiary of hospitality company Marriott that aims to be affordable without compromising style.