Works by Heatherwick Studio, Paul Cocksedge and Nendo feature in an exhibition at New York gallery Friedman Benda, which pools together artists and designers from Generation X.

The An Accelerated Culture exhibition focuses on the cohort of creatives born between the 1960s and 1980s. The name is a reference to Douglas Coupland's 1991 novel Generation X: Tales for an Accelerated Culture, which ended up defining the term for the entire generation.

Curators Libby Sellers and Brent Dzekciorius were enlisted by Friedman Benda to "frame" the generation and have collated work from 20 artists and designers for the showcase, including some of the design industry's most well-known.

"When you're trying to look at a generation it's very difficult to define it, in particular Generation X," Sellers told Dezeen. "The whole point of the X was that they defied definition. So how do you frame this?"

"We started by creating a wish list of the designers we wanted," she continued. "With it being about the generation, it had to be about the designers first, and then we look to the works."

Others featured include French designer Matali Crasset, 53, who is showcasing an abstract wooden furniture set made from lacquered birch. Dutch designer Maarten Baas, 41, is also presenting a zig zag chair made from charred wood and epoxy resin.

Crasset and Baas are among a number of European artists and designers in the exhibit. Sellers notes that they grew up in a time when their home countries nurtured the arts through government funding. The economy also afforded them access to set up their own studios after graduating, which propelled their practices.

"In the mid 1990s, and early 2000s, when there was a lot more investment for young designers and particularly for European designers, the government offered grants and funds, and all sorts of support systems, exhibitions, and publications that accelerated their careers beyond that perhaps of their international peers," she said. 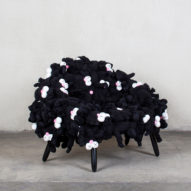 Kaws and Campanas collaborate on pink and black soft-toy chairs

A number of sculptural pieces of furniture are included in the show, such as an aluminum seat that Heatherwick created with the world's largest metal extrusion machine.

Israeli duo Yael Mer and Shay Alkalay of Raw Edges are showcasing a bench made from pigmented wood block, and Bertjan Pot is showcasing gloves and masks made out of yarn and rope.

Aldo Bakker, who is also currently presenting works at New York's Carpenters Workshop Gallery, is presenting a hand-finished solid oak bench made from a CNC machine.

Sellers and Dzekciorius have laid out the exhibit so that the works can be viewed as a collective.

"There is no hierarchy or any trajectory in the arrangements of the exhibition," said Sellers.

"Everything is important to us, there was no first object or last object," she added. "We wanted everything to be a collective – that they were all feeding off this one air."

The curators commissioned London's Studio Frith to design the typeface and infographic to brand the exhibit's wall labels and lettering. The hand-drawn style is intended to capture the transition from analog to digital that defined the Generation X era.

"When you look at the letter form, aside from being just beautiful letters, they've got this sort of clunkiness as they're moving towards linearity and the sharpness of a digitally produced type; they're caught," said Sellers.

An Accelerated Culture is on show at Friedman Benda from 3 May to 8 June at 515 West 26th Street in Manhattan.

The gallery, which was founded in 2007 by Marc Benda and art dealer Barry Friedman, has also recently presented designs by Chilean collective GT2P, and American artist and designer Misha Kahn, as well as a showcase of furniture by architects like Frank Lloyd Wright, Luis Barragán and Oscar Niemeyer.

Photography is by Timothy Doyon.