Belgian designer Casimir is celebrating three decades in the industry with the production of six wooden objects that straddle the line between furniture and art, and another six to follow.

The first six pieces include two consoles, a cabinet rack, a mirror, a side table and a low table, all made exclusively from solid oak and walnut, "the most ecological building material that exists".

The designer, who describes himself as a furniture artist, designed and created all the limited-edition, signed and numbered pieces in his own studio.

Although abstract in form, all of the designs are intended to be used.

Casimir chose to work in wood because he rates the authenticity of the material and its sustainable nature.

"The Casimir oeuvre is mainly about rethinking and questioning classical furniture, or bringing other wooden-constructed items and techniques into furniture," he told Dezeen. "It's about concept, not about styling or a trend."

Cross4 is a console that can be customised in length. It is intended to be leant against a wall.

"The cross is a loaded symbol and part of our Flemish culture," explained Casimir. "It was often placed above the door to show visitors that they were welcome and protected. This console can be placed next to the entrance as a welcome sign, a token of hospitality."

CabinetRack2 is 120 centimetres wide and 180 centimetres high. It was created as "an exercise in what you can do with a standard cabinet".

To assemble the piece, the designer built a cabinet without doors. He sawed this into two equal parts, shifting them at an angle and glueing the two parts together to form a rack that can also work as a room divider.

Mirror3 is a mirror that works to deliberately block the view of the user. Casimir drew on sun blinds – the horizontal slats built into outside walls to block sunlight – in architecture, turning them vertically

"A classic mirror always gives a full reflection of the space," he said. "With Mirror3, the reflection is limited to one viewpoint in the space."

A side table called Arch is the only piece not to be made from solid oak, and is instead crafted from walnut.

The oval-shaped table top is sawn from a larger rectangular tablet of wood. The remains of the tablet are used for the legs which are formed by two trusses. Both trusses cross each other under the oval top and form a small vault. 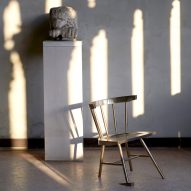 The next piece in the collection is Plank5, a low table that stands 35 centimetres off the ground. Five planks of oak wood are stacked like a fireplace or campfire to form a low table with the plank ends sticking out at angles.

The final piece in the first release is the double-shelved Console3 that rests on three rotatable tripods.

The six designs that will complete the 12-piece collection include three ladders and a cabinet, as well as an experiment with furniture legs, again working with wood.

Casimir intends the entire collection to last more than 100 years, in the tradition of classical furniture making.

"The experiment and gut feeling are important aspects to arrive at the final result," said the studio. "Idea, material, form and function are inextricably linked in the creation process."

Others designers producing furniture in wood include PearsonLloyd, which upgraded flatpack furniture with the Cross chair for Copenhagen brand Takt, and Pedro Venzon whose trio of wooden stools are made by craftspeople in the south of Brazil.