Stirling Prize winning architecture firms including Zaha Hadid Architects, David Chipperfield Architects and Foster + Partners are calling on all UK architects to adopt a "shift in behaviour" over climate change.

"The twin crises of climate breakdown and biodiversity loss are the most serious issue of our time," Architects Declare said in a statement.

"For everyone working in the construction industry, meeting the needs of our society without breaching the earth's ecological boundaries will demand a paradigm shift in our behaviour," they added.

"The research and technology exist for us to begin that transformation now, but what has been lacking is collective will."

The founding members of Architects Declare, who have all won the UK's top architecture prize, have pledged to design buildings, cities and infrastructures with a more positive impact on the environment, which could then be part of a larger self-sustaining system. The organisation is inviting all other architecture studios to make the same commitment.

The built environment currently accounts for 40 per cent of the UK's carbon emissions according to the UK Green Building Council. Carbon dioxide is produced by burning fossil fuels and directly causes climate change.

Earlier this year the UN warned there are only 12 years left to limit global warming to 1.5 degrees Celsius, the only way of averting catastrophic levels of rising seas and increasing extreme weather events.

Another UN report released this month warned that one million animal and plant species are at risk of extinction due to human activity.

The architects also state they want to go further than aiming for net zero carbon emissions for buildings by adopting regenerative design principles, where a structure actively contributes to renewing the resources it depletes. 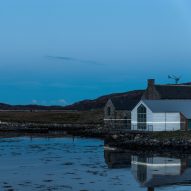 Fosters + Partners has also become the first architecture practice to pledge to design only carbon neutral buildings by 2030.

Climate action group Extinction Rebellion shut down swathes of central London, including Waterloo Bridge, in April to demand government action against climate change. The UK's parliament has since declared a climate emergency.