Aiming to create "a timeless signature chair with a modern aesthetic", Wilkinson used the two elements that characterised the classic bistro chair of the mid-19th century.

The chair boasts a slender, lightweight frame made from steam-bent ash, while the seat and back panel are made from the retro straw textile known as Vienna straw.

But these elements are combined in a form that is intended to be modern rather than traditional.

One long piece of curved ash forms the front two legs and the backrest. The two rear legs slot into this piece, while also creating support for the rounded seat. The result is a design with a simple but bold curved form.

"The general set-out of the design is quite classic but we have hopefully modernised and elevated it a little by trying to reduce the visual thickness in the frame," explained Wilkinson, who is based in London.

"The key detail is the two grooves cut into the steam-bent seat pan ring – one on the top, one on the side – which helps keep the visual lightness from both inside and out," he told Dezeen.

Wilkinson designed Latis for London-based retailer The Conran Shop. It is expected to become a new range, with a desk, a table and a lounge chair also in the works.

The dining chair already comes in three versions – customers can choose plywood or upholstered panels, in place of the Vienna straw. The frame is available in black or natural ash.

The chairs are manufactured in northern Italy, using a combination of production methods. The two main components are made by hand, while additional elements are produced with a five-axis CNC machine.

"As Conran requires product 'little and often', rather than in single big orders, we had to create a design that could be cost-efficient for the business model," said Wilkinson.

"We came up with a system where the steam-bent components could be manufactured in larger numbers then these parts could be adapted as and when different chair variations were required," he explained. 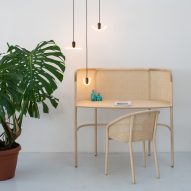 "This allowed Conran to create many more options than they had originally budgeted for. We started with the signature model of the Vienna straw then adapted the details to accept plywood or upholstered variations."

Latis was first launched in April and has now been awarded a Design Guild Mark, a distinction given by The Furniture Makers' Company to products felt to be raising the profile of British design.