After announcing the launch of Beem during Milan design week in April, Wilkinson has released the brand's first collection with two LED lamps, which will be debuted as part of The Conran Shop's Autumn/Winter lighting collection.

Called Smile and Curli, the two designs both utilise the latest flexible-filament LED technology, which allows the bulbs to be shaped into playful forms.

"Historically lightbulb design has not been a fast-moving field. The same shapes have dominated the market for decades – largely of necessity, as filament technology has restricted the possibilities for formal variation," said Beem.

"Today, however, advances in flexible-filament LED bulbs are enabling designers to pursue radical new directions and develop previously impossible forms – and Beem is the world’s first brand to indulge this tech-enabled creativity." 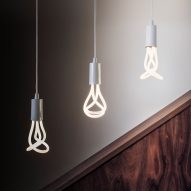 The Smile lamp boasts a simple, graphic design, comprised of a single glass bar of light fitted with a flexible filament and attached to a ceramic base. The light comes in three different shapes: a U shape, a smile-like upward curve and a straight line.

The Curli lamp is designed to look like a swirl of light. Inspired by the decorative twist – or curlicue – found in calligraphy, it takes the form of a continuous asymmetric coil that curls around the bulb holder.

"We consciously set out to make contemporary forms. The bulb market is saturated with retro styling – it's good to create something different," Wilkinson told Dezeen.

"We realised that nearly all bulbs went downwards and appeared to flow out from the bulb holder. Our initial reaction was to make forms that do the opposite – why not go upward and visually separate the parts?" he added.

"A light becomes a sculpture in the air – why do you want to look at the lump of the bulb holder above it? Why not either hide it with the bulb, as in Curli, or make it a key part of the design’s visual balance, as with the Smile range?"

Each light is illuminated using the latest soft-filament LED technology, which can emit bright, warm light for up to 25,000 hours while using as little energy as possible.

The lamps can be hung on their own or arranged in groups. An innovative rotating mechanism hidden inside means that the lights can be easily adjusted to line up with surrounding bulbs.

Wilkinson was the designer of the Plumen 001 low-energy bulb. The design, which was named Design of the Year in 2011, has endured in popularity and was recently relaunched in LED form.

Stimson and Shkodra established Well Lit in a bid to "break the stranglehold of big companies that were flooding the market with poor-quality, overpriced LED bulbs". Wilkinson first started working with the duo in 2016.

"We fiercely want to challenge what existed, and still exist, in our industry and the perceptions of what's possible in terms of design and performance," said Stimson.

"In a market dominated by retro vintage industrial styles, Beem products represent a design aesthetic that looks to the future rather than the past, and which offers a characterful alternative to the nostalgic look of many lighting products."

The Smile and Curli lamps will be exclusively available to the public from The Conran Shop's London outlets from 24 October until December 2018, after which they will be more widely available from other retailers. Beem plans to also launch a table lamp at the end of the year.