Humble Pizza is situated on King's Road, a boutique-lined street in London's affluent Chelsea neighbourhood, and boasts a menu of exclusively plant-based pizzas.

Its almost entirely pink interiors have been designed by Child Studio to emulate the aesthetic of the workmen's cafes, commonly known as greasy spoons, which sprung up across London in the 1950s.

These cafes served no-frills food and drink and typically featured pastel-coloured surfaces made from Formica – a laminated composite material invented in 1912.

"We have long been attracted to the cinematic quality of London's Formica cafes, the duality of modernist design language and the playful, almost cartoonish spirit," explained Chieh Huang and Alexey Kostikov, who head up the studio.

"This project aims to create a contemporary version of this unique typology."

Apart from the white tile floors, surfaces throughout the eatery are clad with cherry wood-framed panels of pink Formica.

The material has also been used to cover the countertops of the circular dining tables and the service desk that sits beside the entrance.

The studio worked closely with the Formica factory to give the panels a subtle, linen-like pattern. 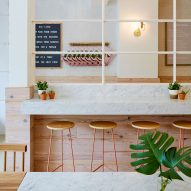 A candy-pink seating banquette runs towards the rear of the eatery, where a partition with a recessed rectangular opening looks through to a forest-green kitchen.

The top and bottom of the opening have been fitted with lights to draw attention to the chefs at work, creating what the studio hopes will be a "cinematic focal point".

Decor is provided by pink broadsheet newspapers that have been hung intermittently across the walls and an array of pink ornaments that line the shelves. A vintage lamp by Italian designer Luigi Massoni and a neon text sign denoting the eatery's slogan have also been included as extra visual nods to the past.

Pink also extends to the front facade of the eatery, which was stripped back to reveal the original timber panelling and ironwork.

As well as interiors, Child Studio also designs objects – back in 2017 it created a collection of globe-shaped lamps that appeared to be precariously balanced on their bases.

Pink continues to be a popular colour of choice for architects and designers completing eateries.

Other examples include a hummus deli in Paris designed by Studio Sur Rue with rose-coloured walls and a farm-to-table restaurant in Boston by ASH NYC with blush-coloured furnishings.