Weird and wonderful designs by architects including Zaha Hadid Architects, Madelon Vriesendorp and Sarah Wigglesworth have been installed over the more traditional models of the V&A's architecture gallery, in an exhibition for the London Festival of Architecture.

Paper Castles sees 15 architects and studios create architectural models that imagine the future while reflecting on the past.

Paper models are suspended above or perched atop the permanent display cases in the V&A's architecture gallery, allowing each architecture practice's futuristic concept to be viewed in conversation with a historical architecture model.

Some practices chose models of their own projects that they felt resonated with historical buildings, while others used Paper Castles as an opportunity to create an entirely new concept.

Hayatsu Architects, founded by Takeshi Hayatsu, presented an inverted model of the Traditional House in the case below. Called Washi House, it's made from wire and washi paper, and shows the house's hidden interior.

Sarah Wigglesworth's model celebrates the green credentials of Bedzed Sustainable Housing, displayed below it, by revealing the studies made to thermally retrofit the building.

Zaha Hadid Architects (ZHA) presented a model of the Morpheus hotel above the Pavilion from the Alahambra, to draw links between their complex geometries, while Interrobang placed its model for Ilford Community Market atop the Arup Campus model.

The Metre and the Foot are Rivals, by Madelon Vriesendorp, Steven Kras and Ian Kirk, is a tribute to Le Corbusier and his five points of architecture, realised as five toes on a foot.

Many of the architects brought a political dimension to their paper castles. Resolve used plastic wallets from security passes to make a model that sits above one of London's Whitehall government offices, as a comment on "the banality of municipal bureaucracy".

Office S&M's piece, called Crown, imagines a future where the housing crisis produces a crop of unusual ad-hoc extensions that could be built under Permitted Development rules without planning permission. 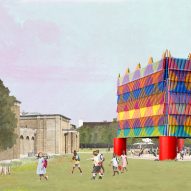 Ten unmissable events and exhibitions at London Festival of Architecture 2019

OMMX's model Within Reach also looks at the problem of room to live, compressing the space of a suburban house down to a small plot.

In response to a model of Fort William, Office Sian used fragments of newspaper from the 1947 Times of India and the words of India poet Munsha Singh Dukhi to show how revolutionaries and poets fought for India to be freed from British rule.

Prince + Selasi also brought up the British Empire in its piece, Parochial Crown: Cosmopolitan Hat. The model imagines the pavilion from the Festival of Britain in 1951 as if it was viewed from the deck of the Empire Windrush, which brought over 1,000 immigrants from the West Indies to the UK in 1948.

Its model, Watchland, imagines the "ultimate 21st century amusement park" where visitors have pictures of every moment uploaded for them.

Identity was another key theme. Mobile Studio Architects and Ian Ng used a model of Gatwick Airport to prompt their model, Flights of Fancy, which explores our continued obsession with air travel and the airport's location in the imagination as a place of shifting identities.

Makespace founder and architect Shahed Saleem created a model of a mosque out of bits from all the other models in the gallery, to show how Britain's mosque's have borrowed and adapted elements to create a new type of architecture.

PUP Architects took bits of London's architecture and "mistranslated" them to produce Building Correspondence, a model that matches the one below it but makes no sense.

The exhibition is completed by Community Reimagined, a series of models produced by children working with the RIBA's learning outreach. The children made community spaces they would like to see in their own neighbourhoods. Their models are displayed over one of Delf Hill Middle School.

The London Festival of Architecture takes place throughout June, with highlights including a pop-up parliament and an exploration of the English garden. Paper Castles is hosting a series of events throughout the month.

Photography is by Mishko Papic.