A sofa, dining table and bed furnish this shop for luxury sleepwear in Brooklyn, which was designed as a "celebration of the home" to reflect its cosy pieces.

The 1,100-square-foot (102-square-metre) Williamsburg space is the latest outpost of the Lunya, a brand that produces chic clothing suited to relaxing at home as well as wearing in public.

All of Lunya's shops, which include locations in Manhattan, Los Angeles and Boston, are designed in-house. They are called Bedrooms, rather than stores, to reflect the relaxed style of the clothing.

"There's such a natural intimacy that actually doing a retail store felt too cold," Ashley Merrill, who founded Lunya in 2014, told Dezeen. "It felt somehow off with what we are trying to do."

"I'm in sleepwear," she added. "The celebration of the home is a real thing for me, so it all feels really natural."

Lunya Williamsburg is laid like a studio apartment rather than a traditional retail store, featuring a lounge and a dining room, with a bedroom in the rear. Clothing racks wrap the perimeter, instead of being the centre of attention.

"No person's bedroom looks like another person's," Merrill said.

"So we didn't need to have it be a cookie-cutter," she added. "Our clothing can live in a lot of environments."

The store features a white-on-white aesthetic with concrete floors and a lot of back accents. A zig-zag wall is lined with roofing material, while exposed brick walls and overhead pipes painted are white to enhance the industrial feel of the shop.

"I just fell in love with the building," Merrill continued. "It's an older building with great architectural charm on the outside." 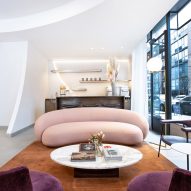 Large windows at the entrance allow natural light to pour into a sitting area with two black, structural Ekstrem lounge chairs by Norwegian designer Terje Ekstrom. Facing this is a white Hem couch and a vintage Italian mid-century coffee table made of acrylic.

In the rear is an area laid out like a bedroom. A bed is placed against the back wall and is anchored by a large black-and-white artwork by Christoph Ruckhaberle overhead. The changing rooms are then tucked into a corner.

For the other art in the store, Uprise Art provided much of the pieces, including a sculpture by Fitzhugh Karol and paintings from Anthony Cudahy and Alex Diamond.

Lunya Williamsburg is also used to host events, cocktail hours and educational workshops, so its design is intended to surpasses its basic retail functions.

Williamsburg is a trendy Brooklyn neighbourhood that is a hub for design-focused shops, cafes and other outlets. Among the new projects in the area are the Rob Peetoom hair salon, Gertie cafe and Celsious laundromat and coffee shop.

Photography is by Michael Clarke courtesy of Lunya.