The project, called D2 Townhouse, involved renovating a five-storey listed Georgian house that had fallen into disrepair, as well as a coach house in the garden that has become overgrown.

Jake Moulson restored and extended the house, then redecorated it with new cladding, floors, fixtures and furnishings custom designed by his studio.

An external cladding system of cast-iron panels was prototyped digitally and features a repeating pattern that has also been used for the railings in the garden and doorways through the house.

Gleaming brass furniture curves around the exterior of the parlour, which is painted a deep blue to contrast with the metal. Leather seating niches are set into some of the brass units, and cupboards are hidden in the others.

The kitchen has a sci-fi style row of surfaces made from thermoformed Corian that has been pressed into an undulating shape. A white-painted cupboard made in a neo-Georgian style hides the fridge and other appliances behind a patterned panel.

The family's art collection is displayed in a room the architects called a "godless chapel" at the back of the house, which has been opened up with a double-height window and a glazed curved bay.

Its floor is made of steel decorated with laser-etched designs in the Adamesque style, an 18th-century neoclassical school of architecture and design.

A colourful patterned ceiling in the library was painted by artist Morag Myerscough, and charred timber was used for the wainscotting of the corridors.

"Channelling D2 Townhouse's Georgian inheritance, with its formality, flamboyance, pomp and procession, Jake Moulson wanted to reinvigorate an imagined life, give the house back its body, to re-dress it sharply against the aged grit and grain of its surfaces, and to love it where it had been neglected," said the studio. 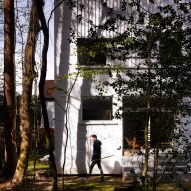 "The result is a disorientating and seductive compression-piece – of temporalities, palettes and aesthetics, mixing dialogues between art, architecture, design, science and fictions, from the intimate to the flamboyant, and from the restrained to the spectacular."

For a bathroom under the stairs Jake Moulson added onyx panels that are uplit to reveal the bubble-effect of the mineral's veining.

In another bathroom upstairs, a fluorescent pink reveal over the sink stands out against a white Corian surface with brass towel rails.

A red dressing room is dominated by a futuristic piece of furniture that rises like a faceted column through the middle of the room, with benches all the way around that have hidden drawers beneath them.

For the children's bedrooms, Moulson designed a custom bed where the semi-circular headboard lights up at night to provide a comforting glow. The master bedroom's bed has a fold-up breakfast table and a concealed television.

At the back of D2 Townhouse, an extension made of structural glass forms part of the bathroom for the master on the second story, above the house's original winter garden.

In the Coach House, a glass bay window cantilevers from the facade, which can be sat in or have objects displayed in it. A bat belfry has been incorporated into the coach house's roof during its renovations, to provide a home for local wildlife.

With their grand proportions Georgian-era houses provide architects with the canvas for renovations with a bit of flair.

West Architecture gutted a townhouse in London and filled it with industrial and period details, and designer Ben Thompson turned a Georgian manor in Hampshire into a hotel.