Priced out of further education, British design graduate Stacie Woolsey approached designers to help her create her own masters course. Speaking to Dezeen, she says elitism is a problem the industry urgently needs to address.

Woolsey had planned to study a masters course after completing her graphic design degree at Kingston University, but was shocked after being told by the Royal College of Art that most students save £40,000 to cover their studies.

Knowing she couldn't afford that, she took matters into her own hands.

"I think – from bits of research I've done and talking to people – the main reason people don't do [a masters] is because they're just priced out," Woolsey told Dezeen.

"I think there's a lot of great people trying to do some great teaching at these institutions. And it's just a shame that it becomes a bit exclusive," she said.

"We need to make education less elitist and create practical solutions that are not restricted by income, location or background."

She asked each of them to set her design briefs to complete in her own time – an idea she describes as "freelance learning" – and completed all four briefs over 18 months of self-directed study.

The designer is exhibiting the results in a "degree show" she named Make Your Own Masters, The show opens this week at Somerset House in London, as part of the cultural programme for Makerversity, where she is currently a resident.

She hopes the exhibition will encourage others to follow her lead.

"I think it's gone a little bit unnoticed in education in terms of its exclusivity. I think undergraduate education is a lot fairer. There is just a lot less government help for an MA. There's no loans or bursaries," said Woolsey.

"I feel like I've proven that this is a real viable alternative."

Woolsey came up with the idea after a brief stint in a startup after graduation.

"What I realised really quickly was most of the people working in design had MAs, and they clearly specialised quite a lot to get into those fields," she explained.

Researching the available courses, she couldn't find one that was a good fit, and those that seemed interesting were too expensive.

"It's such an investment for something that also just didn't feel like the right course for me," she said. "I thought, I might just get briefs from the people that I really would like to learn from who teach, and see if I could do my own kind of thing."

Initially she emailed Thomas Thwaites and Alexandra Daisy Ginsberg, whose work she was interested in. She asked both designers for briefs that she could work on for the next three or four months.

"I think I thought, one, that they would ignore me, and two, that they just would not be that on board," said Woolsey. "But pretty much straight away, they both got back to me, really into the idea."

Woolsey borrowed desk space in three or four London studios for a day a week. She describes this period as "my professional squatting phase" as she established herself as a "learner in residence".

"I really didn't like working from home because there's like no structure in terms of the masters," she said. "And then in terms of the day to day, I needed somewhere to go. So I started emailing some studios that I'd worked at before."

"You have to force things to happen, not just expect to be told," she explained.

Although the briefs took longer to complete than Woolsey originally expected, she was able to work at the same time to pay her way.

"I didn't know if it would work. I think that what shocked me the most was how well it worked," she said.

"I'm genuinely surprised how different I feel about a lot of things in terms of confidence in what I'm doing, and being able to kind of present myself much more maturely. I learned a lot by being more independent in everything."

Created a network of peers to validate her work

Woolsey didn't feel that she could burden the designers with every question, so she started approaching industry professionals with different skills and asked them to be mentors, for project-specific help.

She built her own network of peers – one of the benefits of attending an established institution – by approaching people her age across a variety of fields and asking them to follow her progress and be her first port of call.

She hosted meetings as a way to set deadlines and present her projects. 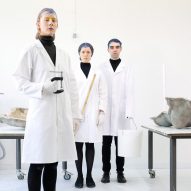 Thwaites' brief became a project about a material futures based around coal and graphene, investigating the possibility of a speculative revolution in the working class mining towns of the north and how the people that live there might benefit from this.

Conversations with Ginsberg turned into a study on micro-plastics as a modern parasite, whilst Solanki's brief turned into a project about how we might redesign milk for infants and the elderly.

Woolsey also looked at the future of children's nurseries in a project called Dirty Soap.

"The first six months were the hardest but after a while I got into the rhythm of it," she said. "I felt like I knew that the learning was working and I just had to stick out the rest."

Community review rather than accreditation

Rather than try to get her course of study accredited, which "felt a bit irrelevant" and would be "almost cheating on the idea a little bit", Woolsey searched for a means to "validate it in a different way".

Instead, each of the designers who set briefs are writing a statement to say how well they think she answered it – more like a reference than a grade.

During the exhibition, Woolsey will also open the question up to visitors who will judge the projects through community review. The proof of her abilities will be in the work.

There will also be a series of workshops and events about Make Your Own Masters, exploring different ways of learning.

"Whenever I was taking a portfolio around, no one asked what qualification I got or what grade I got. It was all about the work," she explained. "Education in a sense can become a kind of elitist thing where it's not so much what you can do, it's where or how you did it."

"My current argument with it is, how do you tangibly grade art and design courses anyway when there's no real right or wrong answer? And it's an industry where no one tells you whether it's right or wrong either. Everything's judged on opinion, and how do you put a stamp on that?" she continued.

Plans to run a self-directed course for others

Woolsey is surprised that more people don't organise their own studies. She has plans to replicate her self-directed model for a group of students who similarly find themselves priced out of further education, or can't find a course that fits their interests.

"I'd really like to run out a phase two of what I've done. I'd like to take a kind of a cohort of learners through a similar system," she said.

Students will be responsible for finding and approaching the designers they would like to work from, while she will offer advice and support.

"There's a lot of great people coming from design courses. I think that the system isn't broken, I just think that maybe there need to be alternatives, not only for the people that don't fit financially, but for who the subject isn't right either," she added.

"Options and systems like this can run alongside one another."

Make Your Own Masters runs at Somerset House from 13 to 20 June.