Aptly named Skinny House, the project carves out a quiet, contemplative space on the site of a neglected yard of a 19th-century shop.

Oliver du Puy Architects, which is based in Melbourne, built it as a home for a London-based client who is a keen meditator who frequently travels to and from Australia.

A key reference for the project was the early domestic work of Japanese architect Tadao Ando, which often turns inwards and uses courtyards to deal with chaotic, compact urban sites.

This was combined with the Japanese concept of "Shinrin-Yoku", or forest bathing, which promotes the health benefits of being immersed in nature.

"The minimalist structure is animated by large apertures and voids which frame a series of vistas out of the building that become part of the landscape of the interior," explained the architecture studio.

Sections of the home are arranged to the level of privacy increases vertically, with office spaces at ground level, living spaces at first floor level and bedrooms on the second floor, each stepping back slightly from the front facade.

"Spaces are structured like a haiku poem, into a suite of intimate moments increasing in privacy as one ascends the building," said the studio.

These floors are arranged to provide a direct aspect from the northern to the southern end of the site, not only introducing more light but ensuring the narrow site feels as open as possible. 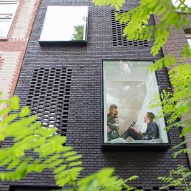 What the architecture studio describes as "raw and precious materials" have been used in the interiors, where exposed concrete meets white walls, oak window frames and staircases, marble details and thin steel balustrades.

At the front of the structure facing north, a monumental, hollow section of concrete grid alluding to a cross allows light to penetrate the upper two levels, which also overlook a small garden space to the rear.

"The building tries to evoke other associations, such as the idea of a primitive ritual, equilibrium and a connection with one's own senses".

Skinny houses built on narrow plots often call for inventive ways of creating homes, and architects have used a wide range of materials to achieve this.

In Seoul a family home was created by stacking different spaces on top of each other to create a skinny brick house, while in Argentina a skinny house clad in white corrugated metal was slotted into a small gap in a dense neighbourhood.