Dutch architecture practice Eklund Terbeek has developed a spacious loft-style apartment for a family of four inside a school gymnasium in Rotterdam, which is over 100 years old.

The apartment, which is aptly named The Gym Loft, has been designed by Eklund Terbeek to have a "minimalistic atmosphere where the experience of space, light and movement are the key qualities".

It is one of two loft-style apartments that the locally-based practice has created inside the former gymnasium of a school that dates back to 1908. An adjacent classroom block has also been turned into five flats.

This particular intervention called for the practice to develop sizeable living areas for the mother of the family – a choreographer and dance teacher who wanted the room to rehearse at home.

However, the practice was restricted in opening up any walls as three of the building's elevations were street-facing. A large mural on an exterior wall also had to be preserved.

Instead, an extension added to building in the 1970s was knocked through to allow for a huge dining and living area that looks through to a small garden. Towards the front of the space is the sitting room, which is illuminated by four original arched windows.

Underneath runs a short platform where the inhabitants can sit and relax throughout the day. 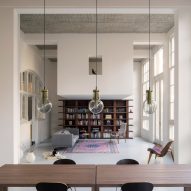 At the rear of the open-plan space is the kitchen, which is anchored by a chunky Carrara marble breakfast island. Touches of warmth are provided by an oakwood panelled partition wall that has integrated cabinetry.

Directly above perches a boxy volume that accommodates the master bedroom and its ensuite facilities.

This first floor level of the home is accessed via a flight of steps that cantilever out of the apartment's peripheral wall. Inhabitants can alternatively use a staircase that's behind the partition in the kitchen, which also hides the two children's bedrooms and their shared playroom.

Keeping decoration to a minimum, the practice has instead exaggerated existing features of the gymnasium, like the ceiling beams. Together with the mezzanine balustrade, it's meant to appear as a "dynamic composition of horizontal elements that tie the different parts of the home together".

"The exceptional dimensions of the space required a few large gestures," the practice added.

Headed up by architects Jenny Eklund and Dominique ter Beek, Eklund Terbeek is no stranger to adaptive reuse projects – last year the practice turned another 20th-century schoolhouse into six light-filled apartments that boast a mix of contemporary and historical features.