A giant, terracotta tile roof distinguishes this home in the suburbs of Ho Chi Minh City, which K59 Atelier has modelled on traditional Vietnamese houses.

Occupied by three generations of the same family, Tile Roof House is designed by K59 Atelier to "recreate the original image" of the Vietnamese suburbs that were once dominated by tile roofs.

It offers a contemporary twist on these traditional dwellings, and borrows elements from them to help the house withstand the monsoon season and summer sun.

"The house is covered by a large roof surface. Roof material is made from terracotta, a material associated with the memory of many family generations," explained the studio.

"It has become a representative of the image of ancient's city in Vietnam."

Like a traditional Vietnamese house, Tile Roof House has a tall, open structure that is designed to create cool, airy interiors.

The roof is elevated slightly on the east side, and punctured by two balconies that facilitate cross ventilation and keep the house cool.

Meanwhile, its sharp gradient means that rain cascades down during monsoon season. It is then collected in a water tank that is hidden towards the edge of the roof, and can be used to water the garden later in the summer.

Any overflowing water is encouraged to fall over its edge to form a natural "rain screen" for children to enjoy at entrance of the home.

Inside, Tile Roof House is divided into two volumes positioned in relation to the sun path, which K59 Atelier describe as the open "action area" and an enclosed "stillness area".

The "action area" is positioned on the west side, and contains open, shared living spaces. This means the private rooms occupy the east side in the "stillness area" to prevent overheating in the afternoon sun.

On the ground floor, Tile Roof House is dominated by a large, triple-height foyer that leads into an open-plan kitchen and living room.

The east side has two bedrooms, a bathroom, an office and a space for worship.

Above, the east side of the house contains a further two bedrooms. One opens out to one of the balconies accessed through shutter-like doors that can be opened to maximise airflow. 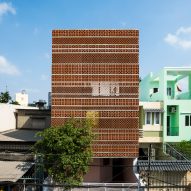 The top floor of the house is also complete with balcony, which leads out to the second balcony.

The interior finishes are muted, retaining focus on the tile roof that towers above and is left exposed inside.

All furniture is loose, and designed to be changed according to the preferences of its occupants.

"We believe that furniture is things attached to human preferences," concluded K59 Atelier.

"They change according to people's habits and needs. Architects create the space that can contain those items."

Elsewhere in Ho Chi Minh City, Sanuki Daisuke Architects recently completed a light-filled concrete house on dense urban plot, Vo Trong Nghia Architects covered the roof and facade of a dwelling with climbing plants and Kientruc O designed a kindergarten made up of a stack of gabled brick blocks.