Vine Architecture Studio has used an array of warm and natural materials to deck out the living spaces and extension of this Victorian-era home in south London, which was previously a coach house.

Situated in the neighbourhood of Camberwell, Love Walk's formerly "unloved yet characterful" interiors have been updated by Vine Architecture Studio to comfortably accommodate a young family of four.

The building was originally erected as a coach house in the late 19th century, serving as a place to store horse-drawn carriages and other equestrian equipment.

It was converted for residential use in the 1990s, but since then has largely gone untouched.

"The reinvention of existing spaces often poses many challenges, but it has many benefits such as reduced building material knitting into the fabric of a place and reinvigorating the lost soul of a building," explained the studio.

"This kind of architectural layering requires the careful identification of the merits of the existing in order to produce a successful summation of old and new."

Preserving a handful of quirky original features, like the dark-blue stable doors on the building's exterior facade, the studio has transformed the ground floor of the house into an open-plan living area.

Walls here have been washed in gypsum – a sulphate mineral typically used to make up plaster or blackboard chalk – leaving behind a dusky pink hue. Herringbone-pattern oak floors have also been installed.

One side of the room features a mid-century teak dining table where the inhabitants can enjoy dinner, while the other has a couple of vintage sofas. 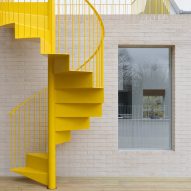 Splashes of colour are provided by a selection of locally-sourced patterned cushion and rugs, which are meant to emulate textiles the studio saw on a recent trip to weave markets in Tangier, Morocco.

A sense of separation has been created by a new staircase that's been designed to appear as two halves.

While the treads and risers on the lower half feature the same herringbone pattern as the floor, steps on the upper half are made out of white steel and are suspended from the ceiling above on slim poles.

Adjacent to the dining area is the kitchen, which has been completed with birch plywood cabinetry, concrete countertops and a graphic blue splashback that nods to the colour of the stable doors outside.

Here the studio has extended the floor plan into a disused corner of an existing courtyard, forming a light-filled garden room enclosed by large panels of glazing. Terracotta tiles run from outside to in.

The warm material palette continues upstairs, where the shower cubicle of the bathroom has been clad in peachy-coloured encaustic tiles. The shower head and tap faucet above the sink are also crafted from copper.

"[The tiles'] nude colour and matt finish tie back into the exposed and naturally textured surfaces elsewhere in the interiors," added the studio.

Vine Architecture Studio is based in Whitechapel and is headed up by architect Rory Pennant-Rea. Earlier this year the studio refurbished a rooftop apartment on east London's Mile End Road, where it incorporated a yellow spiral staircase and a number of skylights.

Photography is by Nicholas Worely.