A major retrospective of the work of designer Virgil Abloh has opened in Chicago, bringing together everything from architectural constructions to Nike sneaker designs and slogan rugs for IKEA.

On show at the Museum of Contemporary Art Chicago (MCA), Figures of Speech is curated by Michael Darling, and designed by Abloh and Samir Bantal, director of OMA's in-house research and design studio AMO.

It is the first solo exhibition for the American designer who made his name working for Kanye West, and is now CEO of fashion brand Off-White and men's creative director at Louis Vuitton.

The slogans that provide a common thread in Abloh's designs feature throughout.

"For me, Figures of Speech is an art exhibition rooted in advertising and the projected image," explained Abloh.

"Any time an idea takes shape on a particular surface – a photo print, a screen, a billboard, or canvas – it becomes real. This exhibition demonstrates how I wrestle with this concept freed from any one medium, looking for personal and specific solutions," he continued.

"This 20-year survey shows how I am constantly looking for a way to transform myself from consumer to producer, navigating a path between tourist and purist, between the literal and the figurative."

A bright hall features dozens of Abloh's sneaker designs for Nike, presented alongside canvases printed with "ADVERTISE HERE" and "TELEVISION".

A glowing pink room is fronted by a translucent pink curtain, with the word "BLUE" printed on top. Next to it is a massive CD case, representative of Abloh's album art for Kanye West's Yeezus in 2013.

Architectural designs include a sky blue ladder and a matching Hacienda Column, made in collaboration with London designer Ben Kelly.

In one room, furniture is stacked up haphazardly over a pile of the rugs Abloh created with IKEA, which feature slogans including "KEEP OFF" and "WET GRASS".

Elsewhere, Off-White garments are displayed on colourful racks, including a black and white piece designed for Beyoncé in 2018.

Some of Abloh's Off-White pieces are even for sale, in a pop-up store called Church and State. The collection recreates a selection of 20 bestselling Off-White products that are no longer available, reimagined exclusively for the MCA.

"This show examines the choices Virgil has made, the media he works with, and the context of his artistic inspiration," said Michael Darling, who is the MCA's chief curator.

"His projects have unfurled with intention, precision, critique, historical awareness, cultural sensitivity, and rigour, and when taken out of the buzzy, frothy context of luxury fashion, celebrity mannequins, and hip-hop one-upmanship, a very measured vision emerges." 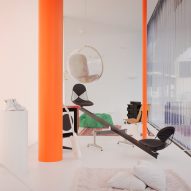 In one space, walls are painted black and the vaulted ceiling above is coloured yellow. Here, monotone figures stand in front of a glowing sign that reads "YOU'RE OBVIOUSLY IN THE WRONG PLACE" – a piece from 2015.

"Essential to this exhibition, Figures of Speech was for me to approach it with my architectural frame of mind," said Abloh, who has a civil engineering degree from the University of Wisconsin–Madison and masters in architecture from the Illinois Institute of Technology.

"Moving between fashion, art, design and music, Virgil has a powerful palette to choose from," Bantal added. "Leaning on his architecture training, he creates a potent mixture of these ingredients making his reach in contemporary popular culture extremely effective."

Virgil Abloh was born in 1980 in Illinois, to Ghanaian immigrant parents. A defining career move came with an internship at Fendi alongside Kanye West, which led to a long-standing collaboration between the pair that launched Abloh into the public eye.

He was named by Time magazine as one of the 100 most influential people in the world in 2018.

Figures of Speech is on show from 10 June to 22 September 2019, and will then travel internationally. It is the latest in a series of collaborations between Abloh and AMO – the pair are also working together on a new Off-White store in Miami.

Photography is by Nathan Keay and Peter McCullough, courtesy of MCA.