Ethical creative agency Nice and Serious has developed an online platform that directs Londoners to their closest zero-waste shops and offers tips on how to reduce your reliance on plastics.

Useless is described by its creators as "London's first digital directory that is dedicated exclusively to showcasing the capital's zero-waste shops".

The website features an interactive map to help users find local shops that sell produce without disposable packaging, and offer refills for items such as toiletries and household cleaning liquids.

The digital platform was developed by Nice and Serious, a creative agency with offices in London and New York City. The firm produces strategic campaigns and branded material for charities and companies including Sainsbury's, IKEA and Ben & Jerry's.

The idea for Useless emerged following a conversation in the office about the volume of plastic packaging used to wrap food and other goods, which is generally disposed of after just one use.

"It started after a lunch break spent getting increasingly depressed about the sheer amount of single-use plastic in our lives," said Nice and Serious co-founder Tom Tapper.

"Someone piped up to say they'd filled their shampoo [bottle] at a shop down the road. Most of the group didn't know that was even an option!"

Some of the employees teamed up to develop a map detailing more than 40 zero-waste stores across London, as well as a "survival kit" to advise users on alternatives to single-use plastics.

Useless invites users to input their postcode or borough and provides a list of nearby retailers that offer plastic-free options. Each listing is accompanied by information about the stores, including stock, location and opening times.

"The limited resources currently available are ugly and cumbersome to use," added Tapper, "so as a creative agency we thought we could curate a resource that is more appealing and considered."

The site's design is playful and vibrant, with bold colours and simple illustrations used to present the information in a clear and contemporary way.

Each retailer is provided with a bespoke illustration of its shopfront created by the Nice and Serious team. For every new listing created, a new illustration is produced.

A crowdsourcing feature allows users to submit their own suggestions for suitable shops, which are then vetted before being added to the directory along with all the relevant information.

Alongside the map feature, the site contains a "survival kit" that provides suggestions for reducing packaging waste. The tips include switching from toothpaste to a tooth powder or tablet toothpaste, and carrying reusable cutlery as an alternative to the plastic forks provided by takeaway restaurants. 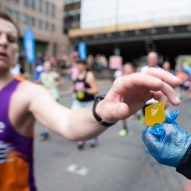 Useless launched on 5 June, which was World Environment Day 2019.

Other attempts to reduce the amount of plastic we use include the edible drinks capsules provided to runners during the 2019 London Marathon, and PepsiCo's drinks dispenser that is compatible with refillable bottles.