The husband-and-wife team behind American firm J_spy have created a retreat for their family in Upstate New York that features a compact interior and basic materials like concrete masonry and standing-seam metal.

Envisioned as a weekend gateway for the urban family, the Catskills House is located in Sullivan County, an area known for its rolling mountains, dense woods and verdant farmland. The dwelling sits on a bucolic, six-acre property (2.4 hectares) dotted with blueberry bushes and pine trees.

The project was designed by architect Jason Shannon and his wife, designer Paola Yañez, who together run J_spy, a studio based in Jersey City, New Jersey.

Their goal was to create a holiday home with a minimal footprint that would provide comfortable accommodations and a connection to the outdoors.

Roughly square in plan, the home is composed of rectilinear volumes with unadorned facades. The home is intended to have a clear and simple shape.

"What makes this house unique is the simplicity of the form, which is essentially four volumes," the studio said in a project description.

The lower portion of the home consists of three volumes, all enclosed by concrete block walls. Large windows and glazed doors are framed with mahogany, which contrasts with the grey masonry.

Perched atop this solid base is the remaining volume – a white, metal-clad box that slightly cantilevers over the site.

"The metal volume overhangs the large openings, providing weather protection and solar shading in the summer," the team added.

Inside, the home is divided into distinct zones. Two bedrooms occupy one side, while an open-plan living and dining area are situated on the other. 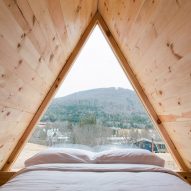 The public area features a lofty ceiling, made possible by the white box floating above. Wrapped in plywood, the ceiling is punctured with operable skylights that bring in daylight and fresh air.

"A portion of the plywood is cut into slats with a felt fabric behind to soften the acoustics in an otherwise hard-surfaced space," the team said.

Sustainability was also a concern for the team. While electricity is available at the site, a geothermal heat pump was installed in order to improve energy efficiency.

The pump heats water from an on-site well, and the water is then channelled to radiant tubes set within the home's concrete floor. During the summer, the geothermal system is used for cooling purposes.

"The energy-efficient mechanical system, along with the roof overhangs that provide shading in the summer and allow solar heat gain in the winter, help make this house very energy efficient," said the studio.

The Catskills is a popular vacation spot for residents in the New York City area and beyond. Other recent projects in the region include the Scandinavian-influenced Eastwind Hotel, which features tiny triangular cabins for guests, and highly reflective glass-box home designed by architect Jay Bargmann.

Photography is by Amanda Kirkpatrick.