New York architect David Rockwell explains how constructing a narrative can guide the design of hospitality spaces in this video produced by Dezeen for the AHEAD awards.

Rockwell Group, the firm founded by the architect in 1984, has won the Outstanding Contribution Award at tonight's AHEAD Americas hospitality awards held at the Faena Forum in Miami.

On top of architecture, interiors and furniture projects, Rockwell and his team are also known for their prolific theatre set design work for shows on and off broadway.

"Rockwell Group has been lucky enough over the last 35 years to combine an interest and passion in designing for performance in the theatre and hospitality," he says in the video interview, which was shot by Dezeen at Rockwell Group's office in New York.

According to Rockwell, narrative is central to his firm's projects, whether for hospitality spaces or theatre productions.

"In every project, we develop and invent a story or a narrative, which means no design decision is arbitrary," he says. "There's not a good chair or a bad chair - there is a chair that helps tell the story."

Rockwell Group has worked prolifically in New York, with a portfolio of hospitality projects that includes interiors for the W New York, Moxy Chelsea and New York Edition hotels. The firm has also collaborated with architecture firm Diller Scofidio + Renfro to design the The Shed, a cultural centre in Manhattan's Hudson Yards.

"The original W Hotel was a game changer for us," says Rockwell. "We worked with Starwood and Barry Sternlicht to create a boutique hotel, but we wanted to take a different tack with W that was more daytime friendly."

According to Rockwell, the renovation brought the atmosphere of a boutique hotel to a larger property. "This is a large hotel from a large company, but was thought of on the individual scale," he says. "Every room was surprising."

"When you go to a Nobu restaurant, you're putting yourself in the hands of the master," said Rockwell. "The chef is offering you different things, you're trying different tastes."

"That has a great translation to a hotel, where you're trusting somebody to curate that experience."

Rockwell Group received a nomination in the Bar, Club or Lounge category at tonight's AHEAD Americas awards for Moxy Chelsea's extravagant Fleur Room, a rooftop bar with a floral theme and views over Manhattan.

"Moxy is a hotel brand that is really anchored around having fun," says Rockwell. "There's a collection of public spaces that riff on the notion of landscape and garden and flowers, and many of them change from day to night."

"I've designed many rooftop bars in New York, but the Fleur Room on top of Moxy Chelsea is my favourite," he added. "It has a kind of Gotham City opulence."

Rockwell Group's interiors for the project attempted to balance the aesthetics of the historical building in which the hotel resides with modern design principles, according to the architect.

"The scale of the spaces is classic like the building, but the detail is very minimal and modern," he said.

"I think it is in some ways one of those ultimate New York experiences. I don't think it would make sense in any other city, it feels very anchored to its time and place." 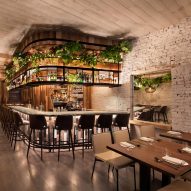 Rockwell believes that the attention to locality exemplified by the New York Edition is key to hospitality design.

"Local is not an optional thing, local is where you you start from," he claimed. "That may mean the local population going there, or it may be how the hotel relates to the rest of the city or country that it's in."

This movie was produced by Dezeen for AHEAD. It was filmed at Rockwell Group's office in New York. Images are courtesy of Rockwell Group.