OMA partners Shohei Shigematsu and Jason Long designed the 600-foot-high (183-metre-high) building for developer Related, with the aim to optimise views towards the bay from the 118 condominiums inside.

"The high-rise really addresses and reacts to the views of the bay," Shigematsu told Dezeen.

To achieve this, the tower comprises two glass volumes stacked on top of one another.

The architects then created cutaways in the lower volume, which step inwards from the midway to the bottom. The upper volume staggers inwards towards the top on the other side to mirror this.

"At the top, where it cuts away, the cut is expressed as a series of crenellated facades with a series of steps," Long added.

The Avery is built on a restricted plot in Transbay, a new, walkable neighbourhood, near to the Salesforce Transit Center and the soaring Salesforce Tower by Pelli Clarke Pelli Architects.

Long described the site as "quite difficult to manoeuvre around", with challenges including a highway offramp that limited access to the property.

In response, OMA designed a masterplan for the entire site. Its scheme comprises a new pathway, a courtyard and additional plots for new buildings, called The Shops at Avery Lane.

"We were aware of the culture of San Francisco, and that the site is trying to create a new culture in a new neighbourhood," said Shigematsu.

The firm carved the new alley, called Avery Lane, diagonally through the site to connect Folsom Street, one of the neighborhood's main boulevards, with the pedestrian street Clementina.

The cut-through also allows natural light to enter deeper into the tower. 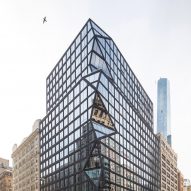 "We were very careful to have a very pleasant expanse on the ground level," Shohei said. "It allows the city block to be more open to the public, and entice people to get in and create a more walkable experience."

Inside, The Avery features permanent residences on the 33rd floor and upwards, and rental apartments from floors two to 32.

Units have spa-inspired baths with Cristallo Pearl marble vanity counters, frameless glass showers and Kaldewei soaking tubs. The decor is influenced by Clodagh's work in the wellness field, and were designed with the help of Feng Shui expert Alberto Amura.

"We wanted to capture that magical feeling of San Francisco for residents at The Avery, with our choices of mixed woods and marbles, for which we were inspired by San Francisco's redwoods and the ocean, as well as all of the Bay Area's natural attractions," said Clodagh.

Clodagh also designed the amenities inside the tower, including an Equinox-designed fitness center, an indoor lap pool, an outdoor landscaped terrace and pet spa.

OMA was founded in the Netherlands in 1975 by architects Rem Koolhaas, Elia Zenghelis, Madelon Vriesendorp and Zoe Zenghelis.

Its New York outpost is run by Shigematsu and Long, and functions independently from other international offices, which include Rotterdam, Beijing, Hong Kong, Doha and Australia, as part of an initiative established by founder Rem Koolhaas.

The Avery marks the firm's first high-rise project on America's West Coast, where the firm is also building a cultural building in California.

OMA New York has also completed a number of projects on the East Coast, particularly in New York City, including a black apartment building,  Sotheby's renovated gallery spaces and a colourful staircase for Saks Fifth Avenue.

Photography is by Bruce Damonte courtesy of Related Companies.