Dutch airline KLM has teamed up with TU Delft to create the Flying-V aircraft concept, which is designed to consume 20 per cent less fuel than Airbus' A350.

KLM has signed an agreement to financially support Delft University of Technology (TU Delft) in its research and development of the V-shaped aircraft, in a bid to make aviation more sustainable.

The aircraft's V-shaped design will integrate the passenger cabin, the cargo hold and the fuel tanks into the wing structure.

Compared to the Airbus A350 – one of the most advanced aircrafts of today – the long-distance Flying-V aircraft concept is smaller, giving it less aerodynamic drag and a reduced weight.

According to KLM and TU Delft, this means the aircraft will use 20 per cent less fuel than the Airbus A350.

While the Flying-V concept is shorter than the A350 at 55 metres, it has the same wingspan of 65 metres, meaning it will be able to use existing infrastructure at airports like gates and runways, and will fit into the same hangar as the A350.

It will also be able to carry the same number of passengers – 314 in the standard configuration – and the same 160 cubic metres of cargo volume.

"We are incredibly pleased to be able to cooperate with our trusted partner KLM on our combined mission to make aviation more sustainable," said Henri Werij, dean of the Faculty of Aerospace Engineering at TU Delft.

"Radically new and highly energy-efficient aircraft designs such as the Flying-V are important in this respect, as are new forms of propulsion," he continued. "Our ultimate aim is one of emission free flight. Our cooperation with KLM offers a tremendous opportunity to bring about real change." 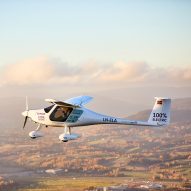 According to TU Delft, global aviation is responsible for around 2.5 per cent of total CO2 emissions, and this percentage is set to rapidly increase as passengers travel more often and further.

As a result of this, last October the Dutch aviation sector presented its Smart and Sustainable action plan to make air travel more environmentally friendly. Its aim is to decrease Dutch aviation's CO2 emissions by 35 per cent by the end of 2030.

The Flying-V is propelled by the most fuel-efficient turbofan engines currently available, and has the potential to be adapted to make use of innovations in the propulsion system, such as using electrically-boosted turbofans.

In addition to supporting a more sustainable long-distance flight option in the future, the Flying-V also provides researchers with the opportunity to improve passenger experience in aircraft.

From the seating layout in the wings to the design of the seats and bathrooms, each element has to be as lightweight as possible in order to maximise the efficiency gain provided in the unusual shape of the new aircraft.

"The new shape of the aircraft means we have exciting opportunities to design the interior, making flying more comfortable for passengers," said Peter Vink, Professor of Applied Ergonomics and Design at the Faculty of Industrial Design Engineering.

"For instance, as part of the Flying-V research, we're looking into new options to having a rest or taking meals on a plane," he added. "Offering food from a buffet is one of the options we're sinking our teeth in."

Researchers plan to reveal a flying scale model of the Flying-V and a full-size section of its interior in October 2019 to test whether it can remain stable when being flown at low speeds.

A number of other aircraft makers are also heading towards a more sustainable future by focusing their efforts on electric technologies.

Among those companies is German startup Lilium, which recently unveiled a five-seater jet-powered electric air taxi prototype that it plans to have operational in a number of cities around the world in the next six years.

Similarly, Uber shared the designs for its electric vertical take-off and landing vehicles (eVTOL) in May last year, which will make up the "world's first urban aviation rideshare network" and will be fully operational by 2023.