Chinese design studio Neri&Hu has topped a tower in Kuala Lumpur, Malaysia, with a hotel arranged around a rooftop pool.

The 143-room Alila Bangsar hotel occupies the top eight floors of the 42-storey skyscraper located between the city's Brickfields and Bangsar neighbourhoods.

Neri&Hu has completed the architecture and interiors of the hotel, which has been designed to be an "urban oasis".

Trees have been planted throughout the ground-floor entrance lobby and the public upper stories.

"Upon entering, the concept of an 'urban oasis' is immediately present through the lush tree plantings throughout the interiors," explained Neri&Hu.

"Arriving at the upper lobby on level 42 the guest is welcomed into a double height space, a lantern open to the surrounding city which allows the maximum natural light."

The hotel is arranged with five floors of bedrooms topped with five stories of public areas.

All of the minimal, but plant-filled, public areas are intersected by white concrete columns and beams that are arranged in a square grid.

On the building's exterior this grid continues in black, visually differentiating the hotel from the apartments below it.

"A rigid structural grid defines the project from outside to inside, signalling its presence on the facade, while acting as a framework within which each function of the hotel is contained," said the studio.

The white concrete grid surrounds the pool, which is the heart of the hotel. 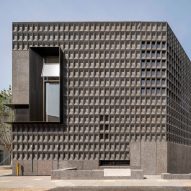 It is accessed from the hotel's upper lobby on the floor above via a "theatrical grand staircase". The pool is flanked on either side by a poolside bar and a sun deck, and overlooked by a restaurant.

"The notion of landscape continuing in from exterior to interior, of nature being inserted into the architecture, is the key element which ties all the public spaces together and defines the urban oasis," said the studio.

"All the venues converge around the courtyard to activate this space in unexpected ways at all hours of the day."

Throughout the hotel the simple palette of white plaster columns is combined with grey stone floors, Balau wood wall details and ceilings, and crafted bronze details.

The grid that runs throughout the hotel continues within the bedrooms, where it is represented with dark timber on the white plaster walls.

Each of the bedrooms has been envisioned as a "hut", which includes a bathroom within a floating box, alongside an "indoor courtyard".

This courtyard space is a small sitting room area next to the windows, with views across the city.

Shanghai-based design studio Neri&Hu was formed by Lyndon Neri and Rossana Hu in 2004.

The studio recently completed an art gallery in Qinhuangdao on the Gold Coast in China, and store for Valextra at a shopping centre in Chengdu. The studio creates a broad range of products, from modular rugs and sofas to lamps.