Decked out in an array of simple and warm materials, August has been designed by locally based Vincent Van Duysen so that guests "can still sense the sober, understated life of the convent nuns".

The hotel is located in Het Groen Kwartier – which translates as The Green Quarter in English – an eight-hectare region of Antwerp that's been entirely pedestrianised.

At its centre is a sprawling red-brick military hospital where injured soldiers were tended to by Augustinian nuns during the 1800s. The site also functioned as a hospital during world war two.

Five buildings on the site and the chapel have been converted to accommodate August and its amenities.

"[Our] strategy in turning the hidden gem and its gardens into August was first and foremost to respect the historical DNA of the site," said Van Duysen.

"The hotel is a place where you feel calm and at home without neglecting the fact that you are in a place that was sacred."

"We have fully considered the past as being a beautiful gift to keep and reinterpret what we have in a modern way," he continued.

The building where the nuns would formerly retreat to sleep now accommodates 44 guest rooms.

Each one has been completed with white walls and sage-green joinery. Other than a selection of lamps by Italian brand Flos, the decor has been restricted to handwoven rugs and rattan ottomans placed at the end of the beds.

Guests can grab a drink at the bar, which takes over the old chapel. The room's ornate pilasters and patterned floor tiles have been preserved with the help of Ghent-based practice Wouter Callebaut Architecten, while its grand domed ceiling has been painted jet black.

Stone-coloured sofas and grey leather armchairs have been dotted throughout. These – along with the soft furnishings in the bedrooms – have been designed by Van Duysen for Italian brand Molteni&C, for which he is creative director. 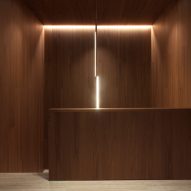 As well as a spa and shop selling a curated mix of lifestyle objects, the hotel also boasts its own restaurant. It occupies a a wide corridor that runs around the chapel and offers seasonal dishes made with locally grown ingredients.

Vincent Van Duysen established his eponymous studio in 1990 and has since completed a host of architecture and interiors projects.

These include the Molteni & C showroom in New York, which is designed to resemble an Italian palazzo, and an Aesop store in Hamburg, which features ladder-like shelving and a chunky stone sink.

Van Duysen also creates products – back in 2016 he made a cast-concrete lamp for Flos.

Photography is by Robert Rieger.