A digitalised fresco depicting soaring cherubs and angered Greek gods is the focal point of luxury fashion brand Dolce & Gabbana's latest store in Rome, which has been created by architecture studio Carbondale.

Set within a 16th-century palazzo in renowned Roman square Piazza di Spagna, the Dolce & Gabbana store has been decadently designed by Paris and Brazil-based studio Carbondale to reflect "a city synonymous with magnificence and uniqueness".

"Rome is a baroque city built by artists and architects such as Francesco Borromini and Gian Lorenzo Bernin – their creations are vital and characterized by a hyper-reality," explained the brand.

"The designers wanted to bring to life this baroque inspiration in a contemporary way, with modern materials and techniques."

One of the store's most opulent decor details is in a room on the first floor, which features a digital fresco created by Paris-based creative studio Pastor/Placzek.

It is then projected across the LED-fitted ceiling and giant monitor screens built into the walls. A floor-to-ceiling mirror on a peripheral wall means the room appears to have a grandiose domed roof. 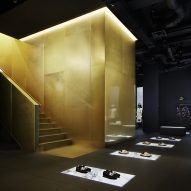 Circular mosaics have also been embedded into the high-gloss floors, inscribed with the words paradise, love and beauty.

Mosaic appears again in the store's 22-metre-long "grand room" where small pieces of gold, red and Burgundy stone have been used to clad two huge domes in the ceiling.

This is complemented by the accessory display plinths and clothing rails, which are crafted from brass, and the scarlet-coloured walls and velvet sofas. The floor and peripheral structural columns have been covered with 15 different types of marble.

Other spaces in the store have been completed with rich walnut surfaces and Murano glass chandeliers.

This is the fourth Dolce & Gabbana branch to open in Italy's capital, joining another store in the city centre and two more in Rome's regional airport Fiumicino.

The brand has retail spaces across the globe – back in 2016 it opened a boutique in Aoyama, Tokyo, which is anchored by a shiny gold staircase.