The result is a 550-square-metre space that uses dramatic contrasts between pale and dark surfaces to spotlight garments and accessories, with 400 spotlights across the ceiling that move around and switch on and off.

The lighting design creates pools of bright light and areas of intentional shadow to suggest the natural play of light on a sunny day. Walls and plinths are painted with matt-black paint, which was selected as the flat colour reflects the light to seem white when hit by the spotlights.

"The lights frame the products and also parts of the walls and floors, so areas appear and disappear constantly," Nicolas told Dezeen. "As you try some shoes, a wall display will suddenly come to life in front of you."

"The idea is also to use the essence of the world of Dolce & Gabbana from Sicily, where the sun is very strong, and creates a black and white graphical landscape and cityscape," he added. 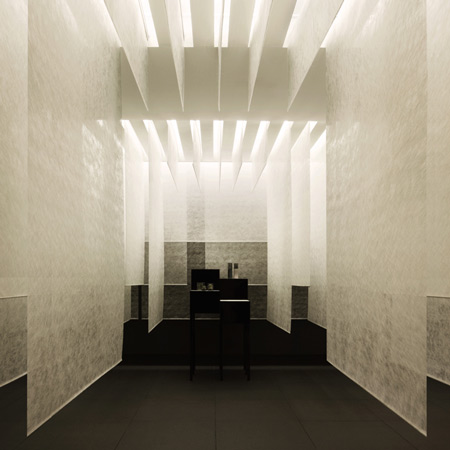 The store houses both menswear and womenswear collections, and accessories over two levels.

Each display plinth and surface is topped with a thin slab of pale Arabescato Carrara marble, and the floor is covered with matt-black ceramic tiles.

The large staircase and a small room for the brand's fine jewellery collection are finished with gold-coloured walls and brass fittings – including a brass ceiling and gold-toned carpet in the jewellery area – to contrast with the rest of the store.

Curiosity described these spaces as glowing like a candle against the chiaroscuro effect used in the rest of the store.

Outside, the facade has a similar black finish, with slices cut out for windows lined using huge, thin pieces of Arabescato marble. A slab of black Carnico marble sits above the glass entrance, with an illuminated version of brand's logo.

Nicolas said that the design reflected his ambition to translate the experience of online shopping into a physical environment.

"I wanted to close the gap between the digital world and the world of tradition retail," he told Dezeen. "Everybody in the fashion industry is looking to create online experiences with websites that are exciting, surprising, where products pop up. In a way the customer is guided through a maze of images."

"I wanted to create a similar experience in a real retail space, where products appear and disappear in a careful controlled choreography," he explained. "I hope it will trigger other brands to challenge such ideas in the retail environment and not only during shows and events."

Nicolas said he was surprised at the level of trust he was given by Dolce & Gabbana co-founder Dominico Dolce in designing the space, whose brief was simply "surprise me".

The Aoyama district is home to a number of flagship shops for international fashion companies, with well-known architects and designers brought in to add extra cachet by creating unique shops.

Aoyama's Omotesando Street has possibly the highest concentration of luxury fashion stores designed by renowned architects, including buildings for Dior by SANAA with interiors by Peter Marino, Coach by OMA, and Tod's by Toyo Ito.