An exhibition at the Denver Art Museum showcases over 200 pieces with a playful spirit that were created by US-based industrial and graphic designers in the 1950s and '60s. Curator Darrin Alfred selects his highlights.

The show, Serious Play: Design in Midcentury America, presents furniture, textiles, posters, toys and other pieces created in the postwar era by more than 40 America-based designers, including Charles and Ray Eames, Alexander Girard and Isamu Noguchi.

With over 250 pieces on view, the show is meant to reveal how designers were influenced by the notion of play, and how it was incorporated into their creative process.

"Beginning in the late 1940s, after the trauma of World War II, American designers intentionally intertwined work and play, generating designs characterized by innovation and whimsy," said Darrin Alfred, curator of architecture and design at the Denver Art Museum.

"Forward-looking and optimistic, these designers believed that play was not adjacent to their process, but essential to it." 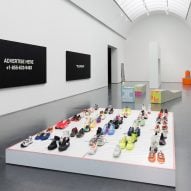 Alfred curated the show in collaboration with Monica Obniski, a design curator at the Milwaukee Art Museum. The exhibition was staged at the Wisconsin museum prior to arriving in Denver, where it will be on view through 25 August 2019.

The show is presented in the museum's Frederic C Hamilton Building, designed by Daniel Libeskind. A companion book features essays by writers such as design critic Alexandra Lange.

The exhibition is divided into three sections: The American Home, Child's Play, and Corporate Approaches. Here, Alfred selects six exuberant pieces that stand out as prime examples of how "play assumes many forms".

Two of America's greatest 20th-century designers, Charles and Ray Eames produced an extensive range of products, many of which were showcased at the Vitra Museum's sweeping Eames retrospective in 2017. The husband-and-wife duo were big proponents of toys and games, which they believed helped engender creative thinking and great ideas.

"The Eameses placed play at the core of their lives and work – it was a dominant personality trait, a work ethic, and an undercurrent to their design process," Alfred said. "For Charles and Ray Eames, toys and the concept of play became a starting point for invention."

The Eames Storage Unit, or ESU, embodied their ability to fuse play with function. Made of metal and wood, the freestanding cabinet was envisioned as an inexpensive and highly useful piece of decor for the postwar family.

"Functioning as a sort of plaything for adults, the ESU had multiple components that could be combined into numerous configurations to suit the desires of the consumer," Alfred said. "Owners could take them apart and rearrange or add on, treating the furniture as a series of modular boxes amendable as needs changed."

"Industrial designs developed at the Nelson studio changed how American consumers thought objects could look and function within their homes," he said.

Beyond iconic pieces such as the Marshmallow Sofa and Coconut Chair, Nelson's studio conceived a series of exuberant wall clocks for the Howard Miller Clock Company. Irving Harper, an associate at the studio, contributed some of the most notable designs, including the Kaleidoscope clock.

"Harper recalled that the wall clocks, unlike other product designs, were seen as lending themselves to treatment as works of sculptural art," said Alfred. "Harper's approach included playing with the clock's basic components – a case that held the motor, hands, face – and reducing them to their basic, geometric forms."

Irving's clocks were particularly radical due to their lack of numerals (indicating the minute and hour). In his view, people determined the time by the position of the hour hand, rather than the actual numbers.

In the case of the Kaleidoscope clock, Harper created a polygonal face surrounded by six walls covered with mirrors. The face is adorned with a triangular pattern rendered in dark blue, lime and turquoise. Harper added a red hour hand and a black minute hand, both of which are transparent and appear to float as they move throughout the day.

Henry P Glass was a Chicago-based designer who had worked for Gilbert Rohde and Russel Wright – two industrial designers who helped popularize modern-style decor in America. Glass went on to create the Swingline collection of children's furniture for the Fleetwood Furniture Company, including this colorful storage cabinet in 1951. The unit features hinged drawers that swing open and close, "allowing them to be manipulated without falling apart," said Alfred.

"Swingline was marketed as the first color-coded furniture intended to teach children ‘order keeping'. The colors made it easy for children to keep things tidy by coding which drawer was for what things," said Alfred.

While not a commercial success, the piece was part of a growing trend in the US to create furniture and objects for children, which the youngsters could use without the help of adults. Similarly, homes were being rethought to incorporate more areas designated for kids.

"Designing for children was serious business during the postwar era," Alfred described. "Parents poured time and money into objects and environments that would foster the creativity of the growing cohort of baby boom children."

The increased focus on children was not relegated to interiors. Playgrounds became a typology of interest for architects and designers, who sought to create environments with sculptural pieces that departed from the standard, mass-produced swingsets and sandboxes. The Japanese-American architect Isamu Noguchi was among those who set out to rethink the playscape.

"Throughout his career as one of the most influential sculptors of the 20th century, Noguchi designed play sculptures and playgrounds that were visually striking, mentally stimulating, and fun to explore," said Alfred. "The abstract, sculptural forms of his progressive play structures could be used in multiple ways, stimulating a child's imagination."

Two of Noguchi's study models are presented in the Denver show, along with a full-scale version of the red Play Sculpture, which visitors are invited to touch and climb upon.

Between 1956 and 1960, the Aluminum Company of America, better known as Alcoa, asked over 20 designers to create visually compelling objects made of aluminium, from packaging and playthings to home furnishings.

Answering the charge, artist and designer Herbert Bayer conceived the Kaleidoscreen, a colourful partition made of prefabricated structural panels that form louvers. A crank device at the base of the screen enabled the louvers to be rotated up to 180 degrees. As the louvers moved, the screen's patterning was altered.

"When the slats intersect and form a continuous plane, one side of the screen becomes a multi-coloured, patterned mural – and the reverse side becomes a richly textured, heat-reflecting surface of natural aluminium," Alfred said. "The slats could also be rotated to adjust exposure to light, to admit air, or to reject rain."

The prototype screen was installed on the campus of the Aspen Institute in Colorado, where it remains today. Beyond an outdoor setting, the screen could also be used within a home. "As a wall, its louvers could be opened to let its occupants step outside onto a patio," said Alfred.

New York-based Paul Rand was among the top graphic designers in the postwar era. He is perhaps best known for his iconic logos for companies such as IBM, UPS and ABC. In the 1950s, he created a long-running advertising campaign for the cigar maker El Producto. As Alfred explained, Rand's adverts marked a "radical departure from stereotypical, formulaic cigar promotion".

"Paul Rand believed that design should make the world a better and happier place," Alfred said. "Play was instrumental to this goal, and Rand's advertisements and packaging designs for El Producto cigars typify his approach."

Rand's whimsical ads gave cigars an anthropomorphic character. The cigars went sightseeing, played baseball, and took the dog for a walk. The Denver exhibition shows several ads, including one featuring a cigar smoking a cigar, accompanied by the text "the way to a man's heart."

"Rand's approach did not distort or dismiss the product or make it cute, but retained its realism while adding personalities to the inanimate objects," said Alfred.

"Although this was not a child-appropriate product, Rand's lighthearted approach created a comic fantasy world. He engaged the audience in a narrative that, like the best children's stories, increased their anticipation for what came next."

Photography is courtesy of the Denver Art Museum.