The Royal Institute of British Architects has named the 54 winners of its national awards, including the V&A Dundee by Kengo Kuma, Heatherwick's Coal Drops Yard and Peter Zumthor's Secular Retreat.

Presented since 1966, the RIBA National Awards is an annual architecture prize that celebrates the best buildings built in the UK.

Winning projects range from public buildings in the Britain's major cities, like the V&A Dundee by Kengo Kuma, through to small-scale private buildings in remote locations, like Peter Zumthor's Secular Retreat.

"Despite the political and economic challenges of recent years, our 2019 RIBA National Award winners show that UK architecture is highly adaptable, immensely talented and as community-focused as ever," said RIBA President Ben Derbyshire.

This year, Derbyshire praised the number of winning projects that involved the revival of historic structures, including John Puttick Associates and Cassidy+Ashton's refurbishment of a listed 1960s bus station and Haworth Tompkins overhaul of Bristol Old Vic.

The new tower at Westminster Abbey by Ptolemy Dean Architects was also acknowledged, alongside Collective Architecture's transformation of a former observatory in Edinburgh into a contemporary art centre.

"I am particularly heartened that more than one third of our winners have creatively adapted existing buildings," said Derbyshire. "Given the scale of the global environmental challenge, we must encourage sustainable development and investment in buildings of the highest quality – projects that will inspire and meet the needs of generations to come."

Sixteen of the winning projects this year were cultural buildings, which RIBA says is a clear demonstration of the current "ambition to create high quality cultural destinations".

Alongside the V&A Dundee, this included The Weston by Feilden Fowles at Yorkshire Sculpture Park, and Jamie Fobert Architects' extension of a former house in Cambridge to create the Kettle's Yard art gallery.

RIBA also celebrated the inclusion of several sustainable housing schemes, including Goldsmith Street by Mikhail Riches, Metropolitan Workshop's Mapleton Crescent and Cambridge's first co-housing community, designed by Mole Architects."At a time when the country is crying out for innovative, high-quality affordable housing, I am pleased we have been able to recognise some exemplar schemes," said Derbyshire.

"I encourage all local authorities and developers to look to these projects for inspiration and rise to the challenge of building the homes people want and need."

Also among this year's winners was Hampshire House by Niall McLaughlin Architects and Rogers Stirk Harbour + Partners's Scottish distillery that is characterised by an undulating wildflower roof.

"Our 2019 RIBA National Award-winning buildings are innovators and mould-breakers – congratulations to every client, architect and construction team for their combined talent and tenacity," concluded Derbyshire. 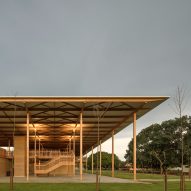 No matter the client or the budget, the awards aim to highlight the best that British architecture has to offer. It is from this list that the shortlist for the 2018 RIBA Stirling Prize will be drawn and announced next month.

Scroll down for the full list of winners of the RIBA National Awards 2019: