Stanton Williams has completed a four-storey addition to a business school at the University of Cambridge, England, which features social and circulation areas that adjoin an existing historic building and are illuminated by large roof lights.

The 18th- and 19th-century buildings originally formed part of the city's renowned teaching hospital, before undergoing a modern conversion overseen by architect John Outram in 1995.

The new 5,000-square-metre facility is intended to complement rather than compete with the former hospital buildings and, as such, adopts a similar approach to its massing, height and materiality.

"The design is conceived as an extension to the original hospital, drawing inspiration from the historic masonry facade designed by Matthew Digby Wyatt," said the studio, which featured at number 412 in the 2017 Dezeen Hot List.

"Through the physical juxtaposition of old, new and the more recent past, the project demonstrates a complex layering of history which embodies the identity of the school whilst expressing its contemporary needs."

The exterior features a combination of pale-brick piers and precast concrete fins that echoes the structural rhythm of the historic hospital's main facade.

The floor heights and openings are determined by the heights of the existing hospital's wards. The overall massing reinstates the scale of the original hospital campus and helps the building sit comfortably in its urban setting.

Deep window reveals incorporate bronze panels that conceal units used to supply natural ventilation to the interiors of offices, dining areas and other spaces inside the building.

"Use of strong colour and refined materials, juxtaposed with exposed structural concrete, references the bold colour, rich materials and exposed structure of both the 19th century building and the 1990s Outram transformation," the architects added.

The foyer and circulation spaces are intended to promote interaction and chance meetings between students and staff. One such space is the main staircase, which connects the foyer with social areas on the second floor.

In addition to a large dining room overlooking the nearby Downing College, the building accommodates several breakout spaces, as well as offices and lecture theatres lined with large windows that provide plenty of natural light and views of the surroundings.

The Simon Sainsbury Centre is connected to the university's existing buildings through various corridors, foyers and a glazed bridge.

In 2017, Stanton Williams completed the renovation of a museum in Nantes, adding a monolithic stone-clad extension to the original Beaux-Arts building.

The studio, which was founded by Alan Stanton and Paul Williams in 1985, is also working alongside Lifschutz Davidson Sandilands to design the first buildings at University College London's proposed Olympic Park campus. 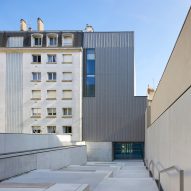