The historic estate, located in the artistic enclave of Tlaquepaque, is treasured for being the site in which General Celestino Negrete signed his support for the Plan of Iguala, a milestone in Mexico's independence from Spain in 1821.

Orozco and Escoto then leveraged Mexican talent for 90 per cent of the design and manufacturing of the furniture and decor on the property.

The interiors are characterised by traditional usage of wool and cotton textiles, as well as locally-produced ceramic works, blown-glass lamps, and wood-carved handicrafts.

Colour is a key feature of the decor, with common areas predominantly monochromatic. The seven guest suites – ranging from 41 to 95 square metres – feature colour palettes that "evoke rest and invite relaxation" with hues of grey, blue, purple, red and green.

"The subtle balance between avant-garde touches and historical architecture distinguish the essence under which Juana Bautista was conceived," the team told Dezeen. 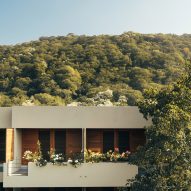 Tiled floors serve as a canvas for ornate black-and-white motifs painted by Mexican artists from Tonalá, a region famous for its craftwork, about 10 kilometres from Tlaquepaque.

Metallic structures in the suites are used to partition the bathrooms with wrought iron and textured glass.

"By prioritising the spaces in each corner, seeking a balance between refined design and functionality, the French-inspired bathrooms retain the proportion in colours, shapes, and textures to achieve an eclectic, yet balanced aesthetic," said the partners.

The team also restored the building's rooftop terrace and colonial-style courtyard, which is surrounded by grey stone columns, and home to a 200-year-old rubber fig tree and a Parisian fountain imported in 1850.

The renovated rooftop terrace, meanwhile, boasts a bar with cerulean furniture and an outdoor swimming pool with vistas of Tlaquepaque's famous cathedral domes.

Juana Bautista Hotel joins a number of boutique hotels in Mexico. Others include Pablo Escobar's converted residence in Tulum and an all-white resort in Baja.