Artesk van Royen Architecten has extended a more than 300-year-old house in the historic centre of Maastricht, the Netherlands, adding a contemporary glass structure.

The studio has refurbished and expanded the house. It also had to factor in the side elevation of the extended house that is currently hidden by a neighbouring building slated for demolition.

"The biggest challenge was to deal with the future plans of the community to make a new throughway near the existing garden of the house," Teske van Royen from Artesk van Royen Architecten told Dezeen.

"The plans for this throughway are still not fixed, but we decided to anticipate for it."

"When the neighbouring building is demolished, you will see the lights in the upper windows, and a repaired side facade from the main house," the architect continued.

The house is the last remaining building of a former monastery built in the 17th century, that was converted into a private residence at a previous date.

At the start of the current renovation it consisted of two parts: the main two-storey volume, visible from the street, and a tower containing a staircase at the back.

The L-shaped extension was built in the backyard, between the tower and a neighbouring building.

"We did not try to reference the history in a specific way, because the history is overwhelmingly present at the location. We wanted to make a sober, contemporary extension, which doesn't compete with the historical architecture," said van Royen.

"The new element of the architecture has to be silent, so we used only two materials, steel for the windows and zinc for the facade."

The extension measures just 33 square-metres, and consists of a single open-plan living area. 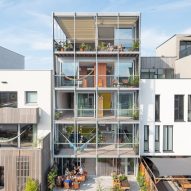 "The new part also has to relate well to the stair tower."

It is constructed using a light steel frame and partially clad in unworked zinc plates that will alter over time to give a natural patina.

The studio has also removed the toilet from the main house and instead placed it in a zinc-clad extension, in line with the original layout that would have had an outdoor toilet.

"In the 17th century toilets were always in a little house outside the main house," van Royen explained.

The studio installed a new street-facing kitchen in the existing building, that directly connects to the extension.

Internally, floors have been finished with terrazzo, with walls left white. Bi-folding doors were added to create what the studio describes as a "garden room".

"The house will be there for sure in another 100 years, with our extension," the architect claimed.

Other Dutch houses on Dezeen include the Tiny Holiday Home within a nature reserve near Amsterdam by i29 Interior Architects and Chris Collaris, and a charred timber and glass villa near Hague by VVKH Architecten.

Photography is by Anja Schlamann.