A long, low bar and a tall stone volume make up this holiday home, which Mexican firm Saavedra Arquitectos has nestled into a woody hillside.

Luzia House is located in the historic lakeside town of Valle de Bravo, about 140 kilometres west of Mexico City. The dwelling sits on a sloped site filled with ferns, grasses and towering trees.

Mexico City firm Saavedra Arquitectos designed the property for a grandfather who wanted to create a holiday home where his children and grandchildren could stay at different times.

In response, the team had to create a dwelling for two different types of inhabitants: a young couple with children, or a pair of young couples.

"Casa Luzia was designed under these circumstances, taking as keys the downslope of the terrain and the two bedrooms of the programme," the team said in a project description.

The home appears as a long, low-slung bar, a portion of which floats over the hillside via steel piers. Rising up from the centre of the dwelling is a tall, slender form clad in local stone, which acts as a visual counterpoint to the horizontal bar.

While the tower appears as a solid mass, it actually is hollow, resulting in a lofty space within the home. The tall block is punctured with a series of apertures that usher in natural light.

"The volume of Casa Luzia is broken by the double-height stone tower – a heavy and brutal element that 'directs the fissure' of space," the team said.

Facades are wrapped in honey-toned pine and large stretches of glass, with windows placed to deliver optimal views of the terrain. Terraces on the west and south elevations are sheltered by a thin, overhanging roof. 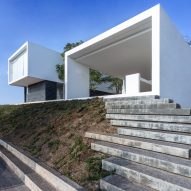 The interior is divided into three parts. The public zone occupies the centre of the dwelling and is flanked on both sides by bedrooms.

"The bedrooms are located on the opposite extremes of the plan, giving privacy and autonomy and creating a tension that it is solved by the complete openness of the public space," the team said.

This sense of openness is enhanced by the stone tower, which contains the living room. Angled windows and skylights illuminate the double-height space. Adjacent to the living room, the home's dining area and kitchen sit under a sloped ceiling with exposed timber beams.

The bedrooms appear to be relatively narrow – a condition that is countered by large, sliding glass doors that diminish the boundary between interior and exterior.

Throughout the home, glazed doors and clerestories bring in daylight and provide a link to the outdoors. Earthy finishes, such as wooden walls and granite flooring, further underscore a connection to nature.

The project has a theoretical underpinning. The architects took inspiration from Mies van der Rohe's Three Courtyards House – a conceptual scheme that was meant to embody the death of the traditional city and the evolution of a new "super-human" society.

Mies' design was, in turn, inspired by philosopher Friedrich Nietzsche's 19th-century book, Thus Spoke Zarathustra: A Book for All and None. In the famed book, the prophet Zarathustra announces to the world that God is dead and that his successor is the "overman" – an entity that rejects society's moralities and prejudices.

"My interpretation of the Mies courtyard house has to do with the abstract, very subtle drawings of the plans," architect Rodrigo Saavedra Pérez Salas told Dezeen.

"It seems to me that he is only trying to suggest the possibilities of architecture," he added. "You then need this 'super-human' to fill the building and become the owner of the 'whole' architecture or space."

Other holiday homes in Mexico include a coastal dwelling by Zozaya Arquitectos that step down a steep slope, a beachfront home by Sordo Madaleno Artquitecto that is organised around a garden courtyard, and a stone house by PPAA Arquitectos that was designed for two brothers who wanted a retreat in "the middle of nowhere".