Architecture studio Dixon Jones and sculptor David Mach have collaborated on a proposal for an event space and marketing suite in Edinburgh, which will be made from a stack of bright red shipping containers.

Named Mach1, the sculptural building will be located in an undeveloped section of the Edinburgh Park business district to showcase Dixon Jones' masterplan for the site.

Comprising of 36 shipping containers it will be British sculptor Mach's first building. He has designed the stack of red containers to look like a giant heap of rocks that he recalled from visits to the Fife coastline as a child.

"We have been working closely with David to realise his creation, a mix of sculpture and architecture," said Chris Milan, associate director at Dixon Jones.

"The structure is intended to be an eye catching and engaging piece of art, as well as a functional building," he told Dezeen. "We love the way it never seems to sit still – the way it looks so different from every angle."

Located in the west of the city, Edinburgh Park is a business park in the Scottish capital masterplanned by American architect Richard Meier over 20 years ago. The southern quarter remains undeveloped, and is now being overseen by London studio Dixon Jones and developer Parabola.

Alongside the Mach1 marketing suite, the 43-acre site will become host to offices, a public square, sports facilities, shops, restaurants and a health centre. 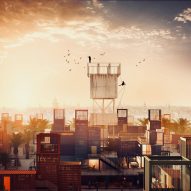 Once built, Mach1 will be 50 metres long, and 15 metres high. The shipping containers will be painted bright red to echo the aesthetic of the nearby Forth Bridge, and nod to the industrial heritage of the area.

However, the interiors will have a pared-back aesthetic to contrasts its shell and "surprise" visitors.

At the heart of the building there will be a double-height exhibition space, which will be used to showcase the masterplan through information boards, drawings and an array of detail and scale models.

This flexible space will feature gallery-like walls and lighting that accommodates changing displays. The building will be complete with a small cafe, work spaces and a large meeting room on the second floor. Mach1 scheme is currently going through planning, with the hope for construction to begin early next year. Meanwhile, work on the first phase of Edinburgh Park's southern quarter is to due to begin in the next few weeks.

Dixon Jones is a London architecture studio founded by Jeremy Dixon and Edward Jones in 1989. It is famed for projects including its redevelopment of London's Royal Opera House in the 1990s, which was more recently overhauled by Stanton Williams.

Other building proposals on Dezeen that make use of shipping containers include TRS Studio's affordable housing in Peru, micro-housing for City of the Dead in Cairo and a football stadium for the 2022 FIFA World Cup in Qatar.

Renders are by Assembly Studios unless stated.