Architecture studio MAD has designed a theatre for the city of Yiwu, China, which will be surrounded by water and topped with "glass sails" to give it the appearance of a boat sailing on a river.

Set to be built on an island near the south bank of the Dongyang River, which flows through the city in China's Zhejiang province, the theatre complex will consist of two theatres and a conference centre alongside a large plaza.

The complex, designed by Being-based architecture studio MAD, has been created so that it will look like a ship sailing on the river.

"Positioned with the mountains in the distance as its backdrop, and the water as its stage, the design responds to its locale, and appears as a boat, floating on the river," said the studio.

The three auditoriums – 1,600 seat and 1,200 seat theatres and a conference centre – will be covered with roofs and walls made from semi-transparent planes of glass. 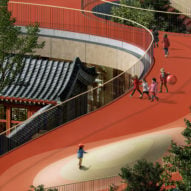 MAD have arranged the roofs so that they look like the sails of a Chinese junk – a type of Chinese ship that was first developed in the 2nd century and are still in use today.

"It is defined by a layering of glass sails that are reminiscent of the Chinese junks that once transported goods across the waters, while their subtle curves echo the Jiangnan-style eaves of the ancient vernacular architecture that is typical of the region," explained the studio.

The island complex is intended to be a new cultural centre and public space in the city. It will be accessed from both banks of the river – a vehicle bridge will connect the complex to the south bank, while a curved pedestrian bridge will join it to the north bank.

"The Yiwu Grand Theater has been designed as a monument for the city, that will serve to connect inhabitants to the waterfront from a new perspective," added MAD.

Construction on the theatre will begin in 2020.

MAD, which was established in Beijing by Ma Yansong in 2004, now has offices in Los Angeles, New York and Rome.

The studio is currently designing a conference centre in northeast China and recently completed a kindergarten with red rooftop playground in Beijing.