Moon/en/co and Van Helmond Architecten have teamed up to form Kazerne, an Eindhoven hotel that boasts just eight rooms and an exhibition space that will showcase pieces from notable Dutch designers.

Composed of eight guest suites, a private members club and a 2,500 square-metre exhibition area, Kazerne has been designed to be a hybrid hospitality space where guests can have an "authentic immersion" into Eindhoven's creative scene.

Home to one of the world's most prestigious design schools – Design Academy Eindhoven – the city is often considered to be one of the Netherlands' creative hubs.

Work from revered alumni like Maarten Baas and Formafantasma will be displayed in Kazerne's exhibition area, along with pieces by other prominent figures from the Dutch creative sphere.

"Unlike any other hotel, Kazerne offers guests an environment where they can experience, 24/7, how design adds value to the world in which we live," explained Annemoon Geurts of locally based studio Moon/en/co, who created the hotel in collaboration with Van Helmond Architecten.

The hotel takes over former barracks of the Dutch armed forces and an adjacent industrial warehouse, with some of the buildings dating back to the early 19th century.

When it came to stitching them together to form Kazerne, the two studios worked to create a setting that "embodied two unique visions: one of the past, the other of the future".

Several of the suites therefore boast historic decor details. The Hay Loft, which is set within an attic, boasts the original wooden roof trusses, while the Corner Duplex includes a pantry that previously served as a holding cell for soldiers. 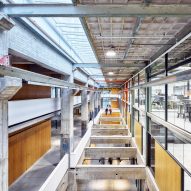 In the Penthouse Loft, which measures 140 square-metres, timber beams are marked with inscriptions from 1855.

Rooms have otherwise been completed in a monochromatic colour palette, with slate-grey walls and pale grey soft furnishings.

As well as a private members club, the hotel also plays host to two eateries – Restaurant Benz, which provides Nordic-inspired fine dining, and the eponymous Restaurant Kazerne, which offers a menu of vegetable-based dishes that nod to Italian cuisine.

The two are connected by a central courtyard that has a charred-wood rear wall and black seating.

Every year the city of Eindhoven is host to Dutch Design Week. Highlights from the 2018 edition included The Grotto, an installation by Bart Hess that was made to resemble drooping piles of flesh, and an exhibition of ten objects that explored how humans can tread more lightly by Dutch Invertuals.