Graduate designer Hyunseok An wants to highlight the role that "unappreciated" algae could play in our diets by creating an indoor micro-farm for the home.

Designed to introduce algae into our everyday lives, The Coral micro farm is a wall-mounted bioreactor that aims to encourage people to use algae as a more sustainable component of a nutritional diet.

As part of his graduate project at Rhode Island School of Design, An proposed integrating algae consumption into our daily rituals via home-farming activities.

"Algae are some of the most efficient carbon dioxide scrubbers in the air, with 10 times greater CO2 fixation than terrestrial plants," explained the designer.

According to An, algae was deemed "the most ideal food for mankind" in the 1974 UN World Food Conference, while NASA uses algae as dietary supplements on long-term space missions due to its rich, well-balanced nutritional content.

"Algae is critical for sustainability yet is an unappreciated part of nature," the designer added. "The Coral suggests a socially acceptable way of bringing algae in."

Comprised of 16 cubes that fit into a wooden four-by-four grid, each culture cell in the wall-frame changes colour from transparent to a light, mint green hue and eventually to a dark forest green when the algae is ready to be consumed.

When fully grown, the cell contains around two grams of algae, the recommended daily intake.

The Coral has a bi-weekly cycle, with each cell taking two weeks to replenish after harvesting. This enables users to grow and eat algae every day, using one cell per day.

An also used this colour-changing process as a means of making the algae more aesthetically pleasing.

He wanted to create a design that would make the substance more appealing, encouraging people to welcome it into their home for decorative purposes as well as nutritional. 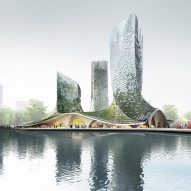 "We tend to dismiss algae, associating it with negative feelings of being mossy, slimy and gross," said the designer.

"This isn't strange, because we usually see algae in unpleasant situations – stagnant water, with a nauseous smell like pond scum – and these contexts influence our perception of algae as distasteful," he continued

Patterned with coral-like designs imprinted onto each cell, The Coral farm also aims to highlight the environmental benefits of algae in preventing the event of coral bleaching.

A worldwide phenomenon caused by global warming, coral bleaching occurs when changes in conditions cause the coral to expel the symbiotic algae living in their tissues, making them turn completely white.

The process of the 16 cells changing in colour from white through to different shades of green mirrors the reverse process of coral bleaching.

As the colour of the cells become more vibrant as the algae grows, it symbolises the revitalisation of coral.

Designers and architects are becoming increasingly aware of the benefits of using algae.

Similarly, London-based architecture office EcoLogicStudio harnessed photosynthesis in algae to remove air pollution with a "living curtain", designed to rest over building facades as it captures and stores carbon dioxide.