The concept involves introducing a layer of algae to provide natural insulation, as well as offsetting the building's environmental impact by absorbing carbon dioxide and producing oxygen.

"The culture of micro-algae on the building facade is a process developed by XTU for several years," the architects explained in a statement.

"It allows the symbiosis: the bio facade uses the thermal building to regulate the culture temperature of algae and at the same time these facades allow a much better insulation of buildings."

Glass towers can prove problematic from an environmental point of view as they simultaneously allow heat to escape and gain it via solar glare.

Engineering firm Arup pioneered algae facades five years ago, with the world's first algae-powered building in Hamburg, Germany. As well as shade, the micro-algae growing in its glass louvres could be used to generate renewable energy. 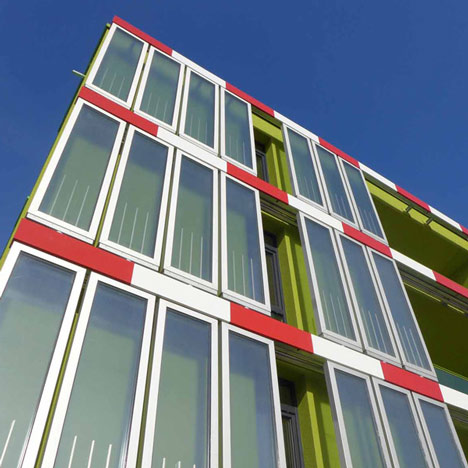 XTU Architects has also suggested that in the case of its Hangzhou towers the algae could be harvested for use in medicine or cosmetics.

Algae is gaining popularity in beauty products thanks to its high protein and nutrient density, while the photosynthetic organism's mucous secretions purportedly have moisturising properties.

Other green elements of the French Dream Towers proposal include panels covered in vegetation and greenhouses in the tops of the tallest glass towers, filled with trees that would filter the air and provide a leafy place for occupants to relax in.

The shape of the towers and the rippling podium that connects them all at their base is designed so that rainwater would slide down the sides, through the opening in the centre and into basins below.

"Hangzhou is a city where water is very present, we want to continue, update and highlight this tradition," explained the architects.

Each of the towers would be themed around themes chosen to demonstrate "French expertise". One is for cuisine, and would feature fusion gastronomic restaurants and a panoramic bar. The hospitality tower would include a hotel, spa and beauty salon.

A tower dedicated to art would have its own gallery and artists' residences, and the final tower would be dedicated to future-facing business with offices, a start-up accelerator and co-working spaces.

In 2015 XTU Architects designed France's expo pavilion from wooden latticework cut by robots, with plants and food suspended from the underside of arches.

For a wine museum in Bordeaux the practice created a bulbous building designed to evoke wine swirled around a glass.