Architecture studio 07Beach has placed a bathroom alongside a central courtyard at the centre of this house in Kyoto to give the clients the feeling of "open-air bathing" in their own home.

Japan and Vietnam-based 07Beach created the house on a tight urban site with no space for a garden and very few areas for windows on the external walls.

To bring light into the house the studio arranged the rooms around a sky-lit courtyard planted with a tree.

"The clients preferred an open plan where they would be able to see their three children," explained the architecture studio.

"The house was designed as one big space, placing the double height living room at the centre so they can see who does what."

This includes seeing who is in the bathroom, which has been clad with green tiles to evoke the feeling of being in a forest. Adjacent is a small, private toilet space.

"Although a curtain rail was set up in the bathroom just in case, it seems the family got used to the exposed bathroom, and still use it without a curtain," explained the studio.

To the north end of this central space is the garage and entrance, while a south-facing master bedroom is at the back of the house. 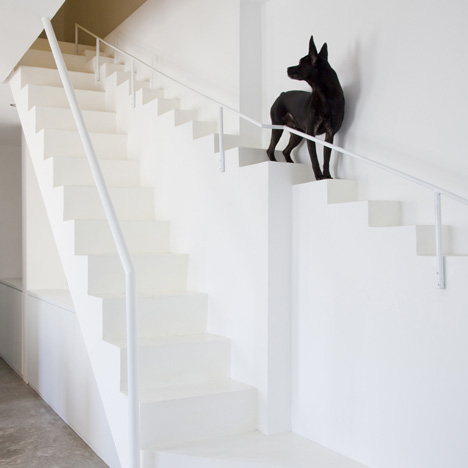 House Renovation in Vietnam by 07Beach

A staircase runs along the eastern edge of the courtyard up to the children's bedrooms, along with a tatami room – a simply furnished traditional Japanese room with a floor covered in tatami mats, which is enclosed by a sliding wooden screen and has a south-facing balcony.

The wooden structure of the home has been left largely exposed, on the upper level forming a grid that frames the slatted wooden wall of the tatami room and the shoji screen beyond leading on to the balcony.

The ceilings have been clad with wooden panels and the stair and balustrades are also constructed using wood. Simple white wall finishes help make the space feel as light as possible.

"Finishes were chosen to balance the modern structure of the house with traditional Japanese style, in line with the client's preferences," explained the practice.

07Beach was founded by Joe Chikamori, who studied in Tokyo prior to founding the practice and moving to Ho Chi Minh City.

The practice often adds characterful elements to their designs, such as this renovation of a house in Vietnam which provides a separate small staircase for the owner's dogs.

Photography is by Yosuke Ohtake.