Johan Sundberg Arkitekter and Blasberg Andreasson have built Andrum, a concrete spa overlooking the grounds of a centuries-old estate in Höör, Sweden.

The stepped concrete volume sits on the western edge of the estate's loosely enclosed inner garden. It is built into a slope that runs down towards a lower park.

Johan Sundberg Arkitekter and Blasberg Andreasson designed the spa called Andrum, which translates as "breathing room", to be a calming place.

"The building is designed on the basis of sensual impressions – light, aroma and taste, acoustics and touch," said the architecture studio.

"The materials are are kept in their original form as far as possible, and together they form an entity that is at once soft-spoken and beautiful."

Andrum is a series of connecting rooms with various spa facilities, including baths, indoor and outdoor pools, a sauna, a steam room and a waterfall experience, as well as treatment and yoga rooms.

A restrained palette has been used to create the simple interiors, which primarily feature exposed concrete walls, stone floors and slatted wooden ceilings.

Dating back to the 16th century, the Åkersbergs Stiftsgård estate was heavily renovated in the 1900s and is now home to a conference centre, chapel, hotel, hostel, restaurant, all of which is managed by the Church of Sweden.

Andrum's form was designed by the practice to be "subordinate to the existing structures", and is split roughly into two halves.

To the west, facing the courtyard with full-height windows are the smaller treatment rooms and staff areas.

This facade is articulated by thin wooden columns, conceived as a continuation of a colonnade formed by the chapel and hostel either side. All three buildings sit loosely around the courtyard.

To the east, on the lower level, a double-height glazed space housing a resting area and pool overlooks the surrounding natural landscape, sitting atop a solid concrete base. 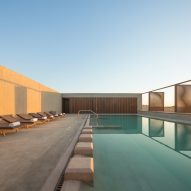 "An arcade flanking the inner garden's western side creates the building's foyer," said the architecture studio.

"From that room, one wanders down to a lower plane excavated in part from the precipice. In these high-ceilinged rooms, there is contact with nature on all sides."

The idea of a colonnade is continued through to the lower resting space, where thin concrete columns split the face into glazed strips.

To the south, a more secluded terrace space has been created that sits on a stone platform. The terrace has an outdoor pool that has an even closer connection to the surrounding park.

The practice has previously completed several homes in Sweden, from Sommerhaus T, which took inspiration from Japanese architecture, to a large gabled summerhouse sitting between a pine forest and a beach.

Photography is by Peo Olsson.